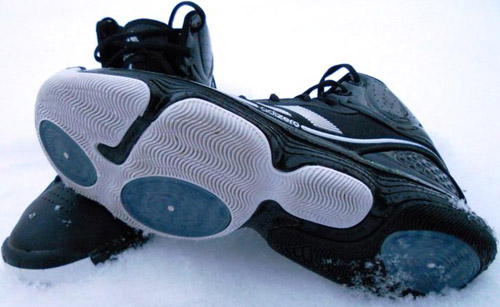 Adidas has a tendency to roll out whole lines of basketball shoes with themes, however significant or insignificant in nature. Just off the top of head of my head, what comes to mind are the Equipment lines, the Feet You Wear lines, the a3/BOUNCE lines, the Team Signature lines and what is now dubbed the adiZero line of basketball footwear. All of the aforementioned have had some particular kind of significance and signification for their being, and the adiZero series is exception. Wanting to emphasize more lightweight, high performance product, adidas has used the new theme to illustrate new designs that place a premium on comfort and high-wear footwear. Particularly for the basketball section of the company, the adiZero Infiltrate may be its best example. Though it’s not a signature shoe for any of the NBA players currently wearing the shoe, the adiZero Infiltrate is likely the best of the bunch, and having tested the shoe over a period of a few weeks, I understand why.

Looking at the shoe, it’s very appealing. The mix of synthetic leather, mesh, and faux-patent leather on my black/white/silver pair gives the aZ-I a bit of depth that most black/white shoes often lack. Just something as simple as different finishes on a two-palate shoe is enough. The silver-streak-lined three stripes give some additional zip, as does the compression-molded ethyl vinyl acetate (CMEVA) midsole that is covered in a glossy (but lint/dust-attractive) gloss. For being a basic model of the more pricy adidas available right now, the aZ-I has class.

The first things I noticed when I slipped my feet into the aZ-I and laced up was the immediate foot lockdown and plush, but supportive feel underfoot. Those feelings are paid for in full by the set-up of the Infiltrate’s Sprint Skin, adiprene+ and GeoFit technologies. I also felt that this particular model of adidas gave me the best near-1-to-1 fit that I’ve ever experienced with an adidas basketball shoe. Through testing the shoe in continuous half-hour to hour-long periods, starting with the Sprint Skin, I found that it aids most in lateral and medial fit. The breathability was adequate and was sufficient in providing a comfortable space for my feet; the aZ-I’s mesh tongue was excellent in allowing hot air to escape and is so light, and is not bothersome for the flex point of my ankle or lower leg. The Skin made use of the aforementioned three stripes with great innovation, as the stripes provided noticeable support laterally, from the eyestay to the bottom of my feet.

Moving on, the GeoFit collar that is so visibly arresting on the adiZero Rose is also used in the adiZero Infiltrate, standing out particularly inside the shoe with two fairly large foam pods that act to hug the ankle when the shoe is laced to the top. The GeoFit here is actually better than the Rose’s collar, is more comfortable, and the rising collar of the aZ-I is not a hindrance, and proves to be a helpful design wrinkle in very good lockdown of my feet. The well-padded features of the GeoFit collar makes wearing the shoe a joy.

Another thing I really like about the adiZero shoe is that it is so good underfoot. It comes equipped with a premium insole/sockliner that has a great balance of cushioning and density for support. There’s a springiness that comes from the aZ-I that wasn’t apparent in the adiZero Rose, and I largely attribute that to the Infiltrate being built with adiprene+ in the forefoot (which for those of you that don’t know, is a high-density foam insertion or filling in adidas’ midsoles). In addition to the adiprene, the midsole is of such high quality in that it’s very much a substantial foam base that can withstand lots of force on impact landings, but is surprisingly light. The case only gets better when combined with the Puremotion outsole engineering, which implements a macro-breakdown of the foot’s major regions as a way to provide a more natural feel in the shoe; I cannot tell a lie when I say that all Puremotion shoes are great when combined with said EVA midsole and adiprene technology–and surprisingly again, at the end of it all, it kicks the adiZero Rose in the butt as far as comfort and playability is concerned (which is a compliment to the Rose, considering how good it feels on its own). Throw in the Infiltrate’s patented Wavebone Traction Surface herringbone pattern for supreme traction and it’s a winner.

I do have a couple of qualms with the aZ-I, though. One issue I have with the shoe is that the midsole attracts a lot of dust and though it’s a cosmetic issue (and easily rectified with a dampened cloth), it’s still sort of a sore spot. Also, while the arch support is fair, the Puremotion outsole on the aZ-I doesn’t make use of the Torsion System that provides great, consistent arch support; my fascias were feeling the faintest bit of strain, but not significant enough to change out of the shoes, but enough for me to note it.

All in all, if the adiZero Infiltrate is one of the best shoes on the market and can be easily worn by players of all sizes. Whether you’re ground-bound or ready for flight time, the aZ-I is a sure thing for quality build, style and performance.

(Much thanks to Paul and adidas America for their contribution and support in this review!)

Sandy Dover is a novelist/writer, artist, and fitness enthusiast, whose work has been featured in Robert Atwan’s “America Now”, USA Today’s UWire, Yahoo!, and now in Buckets and Playmaker magazines. You can find Sandy frequently here at SLAMonline, as well as at Facebook and Twitter.