From Air Jordans to Africa 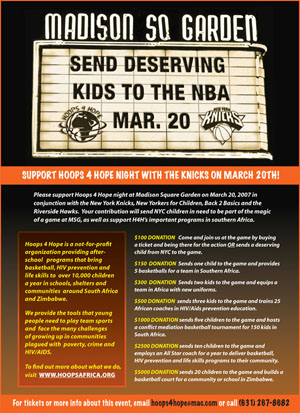 There will be Tuesdays (my designated day on the site, in case you forgot) that I have a burning issue to discuss something that isn’t already being dealt with in the magazine (which will always get the bulk of my “creative” attention as long as I sit in the Editor-in-Chief’s chair and the site is so ably handled by Sam and friends).

Then there will be the Tuesdays that the mag’s business (such as locking in our next cover) is draining me and I feel grateful that interesting people from the world of basketball contact me almost every day looking for love/publicity…and instantly solving my dilemma of what to write about.

Spotlight number one should be shone on my man Calvan Fowler, the producer of JordanHeads: A Documentary About Air Jordans and the People who Love Them. We first shouted out Calvan about a year ago on the Links when Calvan’s project was just starting and he needed subjects to interview. Step two in SLAM’s promotion of Calvan’s project came when I wrote about him in last summer’s issue of KICKS. I hadn’t heard from Calvan since that ran, so while I assumed the project was going smoothly I didn’t know for certain. Well, a phone call the other day filled me. “The movie is going very well,” informed Calvan. “I want people to see my site not because I need more people to interview—although if their collection is very special they can feel free to reach out to me—but because I’m making so much progress on it and I’d like people to see it. So, if you can, send them to the website so they can see the new trailer.”

Not one to lead our loyal readers astray without researching things first, I checked the site this morning and Calvan was not lying—the trailer is fire. There aren’t captions under the people being quoted, but true SLAM heads will recognize a number of people from the extended SLAM family, past and present, including Come Chantrel, Scoop Jackson and Russ Bengtson. Calvan expects his project to be completed in time to come out at the same time as the 2008 release of the Jordan XXIII, which will be, in his opinion, “the most promoted thing ever.” But who’s being quoted is kind of beside the point anyway. What you can tell from the trailer is that the look, sounds and passion of the film will be on point, and that anyone with even a passing interest in Michael Jordan and the shoe phenomenon he created will love it.

But don’t just take my word for it. Check out the film’s site to further whet your appetites.

Speaking of shoes, what do you do when you have too many? Giving them to someone who needs them is a good start. We know of few better organizations that handle that than Hoops 4 Hope, a non-profit that uses basketball to work with young people in South Africa and Zimbabwe (and redistributes kicks from oversaturated American closets to needy African feet. Check here for more info on how to spread your wealth.)

Now, Hoops 4 Hope always warrants love, and to be honest, a lot more coverage than a blurb on my blog. To remedy that situation I’ve got an excellent, Africa-based writer working on a lengthy feature on Hoops 4 Hope that will run in one of the next two or three issues of the magazine. Trust: this will be an article worth reading. My reason for mentioning H4H today is that they have an event in a couple weeks that founder Mark Crandall wants publicized. It’s Hoops 4 Hope Night with the Knicks, March 20th at Madison Square Garden. The eflyer for the event is pasted right here…

or you can also get info about the event at this web address. For those of you too lazy to read the small print or click on that link, the goal of the evening is to sell donated Knick tickets to H4H supporters who will either attend that night’s Knick game (against the Mavs) or give the tickets to local kids who don’t make too many games. Regardless of who uses the ticket, the money spent on the ticket will benefit Hoops 4 Hope’s efforts in Africa. Seems like a worthy event to us, so see if you can help out. And again, at minimum feel free to empty your closet for these guys. After all, you’re gonna’ need room for those next Jordans.