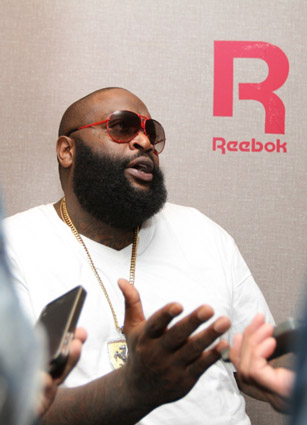 Change was swirling in the air at Madison Square Garden on March 14, as the visiting Portland Trail Blazers prepared to take on the Knicks.

On New York’s side of the court, players readied to play their first game without Coach Mike D’Antoni, who resigned earlier in the day. On the Blazers side, unbeknownst to them, the players were warming up for their last game under Coach Nate McMillan, who was let go later that night. Meanwhile, high above the woods, in a luxury suite decorated for the occasion and populated by Mike Posner, Rick Ross and Swizz Beatz, Reebok invited a few guests to announce a major move of their own.

“Nobody is being original no more,” Beatz, the creative director of Reebok Classics, said in his opening address. “Everybody is just falling back and reinventing the same thing, and I’m tired of it.”

Tired enough to talk about it, sure. But more than that, Swizz was tired enough to spearhead a new Reebok Classics campaign aimed to wake the sneaker game up like a shot of 5-Hour Energy.

Titled “It Takes a Lot to Make a Classic,” Reebok’s spring launch is ambitious, artistic and aims to deliver some iconic gear in a fresh new package. The meat of the campaign, as Swizzy explained in the suite, is the kicks—specifically, the iconic 1980’s WorkOut, Freestyle and Ex-o-Fit. The potatoes of it are the endorsers—namely, as their presence at the event announced, Mike Posner, Rick Ross and YMCMB’s Tyga (who didn’t attend the game).

“Look,” an excited Swizz, decked out in custom-made Reebok gear, said, “we got Basquiat, and we got Keith Haring now, you understand? Teaching the art through fashion and music at the same time, this is how we’re shaping the company to be a full-fledged vehicle that really represents art. Keith Haring, Basquiat, Ross, Swizz, the kid Mike Posner, Tyga—that’s the starting lineup but that’s not even who we’re going to the playoffs with.”

As Carmelo flushed home a basket to put the Knicks up a couple dozen (“Long as I’m hearing that ‘Anthony’ I’m good,” yelled Swizz), Rick Ross and Mike Posner sat down for interviews…but not before Beatz could get in a final word:

Question: What is Reebok’s plan to differentiate itself from other brands?

Rick Ross: I’ll take that one. I think the statement Reebok has made just over time is self-explanatory. I always gotta bring this up. Coming up in the South, where we come from, this (points to his WorkOuts) was the No. 1 sneaker. We called them the Souljas—rest in peace Soulja Slim. Coming from the streets, this is what it was about, this was your go-to sneaker. And then, just watching the game go to the next level with the Pumps, the Shaqs, the Dee Brown No-Looks, and my favorite, the Dominique Wilkins—

Swizz Beatz: And the Iversons.

Ross: The Iversons, shout out the Iversons. I think at the end of the day, being part of a brand that pushes my passion—music, my passion which is hip-hop—I had to join the movement. From an executive standpoint, from a CEO artist point of view, this is the only brand that’s extending a hand to hip-hop and the culture.

Question: What you’re saying is, what you guys are doing different is that the other brands are just sending products, while you guys are actually the architects behind the brand?

Ross: (Points to his custom Reebok jacket and t-shirt) Look at this shit!! I mean look at this shit!! Let’s keep it one hundred, look at my Basquiat joint, look at my joint, know what I mean? As an artist, there’s nothing more important than freedom of expression and being able to call somebody and give them your ideas and in 48 hours it comes to life. I think it’s only going to help us as artists. It’s incredible.

Question: You mentioned Basquiat and Haring…What inspires your style?

Ross: Being a man of international leisure.

Swizz: Being a man of international leisure. My style is inspired from those things. Starting from the hood first, though. That’s where the balance comes from.

Swizz: BX, NY—we was there today. There’s certain things you can do and there’s certain things you can’t do, so it keeps the balance, see what I’m sayin? Ross got his own style, which is very iconic in his way. He can wear shit that nobody can wear and make it look fresh. Anybody can put on something that people think is hot at that moment, but it’s cheating. Pull something out and make that shit fresh for the first time again. When everybody lookin’ left, you say, I’m lookin right, and make right look fresh. Be a leader.

Question: Who are some of the style icons?

Ross: It’s funny because my style icons were Ice Cube with the curly perm and black Dickies. It was street music and street hip-hop and that’s what I seen. Of course, once Southern hip-hop came into play, it was me going back to these Reeboks. It was the emergence of Master P and Cash Money, that became a reality for Southern hip-hop. This was the brand that we embraced in the South the most, Reebok. I look at Reebok like a Rolex. It’s about longevity. Audemar came along and had a nice run; Hublot got a few shout outs; but Rolex is still here.

Question: Money’s not the motive for you guys partnering with Reebok. So what is the motive?

Swizz: (Pulls at his custom jacket) Shit like that (laughs).

Ross: As another example, every time I get with Swizz, we talk about everything from style to art. He introduced me to BrainWash. He put me up on Basquiat. And when we talk about brands and styles, I don’t see other artists designing their own jackets and hats and picking their own materials. I don’t see other brands doing that with artists. As a boss and an artist, that’s priceless. That’s the gateway and the door that Reebok has opened up to us artists. You got to really fully take advantage of that for the culture.

Question: Mike, anything to add?

Mike Posner: It goes back to what Rozay was saying: it’s about pushing the culture forward. I know with this brand, they are very intent in not only helping me tell their story, but in helping me tell my story. That was the selling point for me. [Also], Allen Iverson was my hero more than anyone else when I was growing up. So to be sitting in this chair today, I’m literally walking in one of my hero’s footsteps, so it’s very special.

Ross: How he used to pull up his shorts and play D.

Posner: I wasn’t a big Starks fan, I got to be honest.

Ross: You got to give Starks his props.

Question: You got to give Allen Iverson his props as well. Mike says that was his hero; what about you guys?

Ross: (Laughs) The culture was always hand in hand, from sneakers to hip-hop to sports arenas. It was always a statement, shout out to AI, man.

Question: What about you Swizzy. You a big AI fan?

Swizz: Of course! AI was the first person in basketball—

Ross: He was the young kid who got the big check! He repped for the hood! He was also one of the greatest guards of our time.

Swizz: Braids, tattoos and jewels—stuntin’ on the court. Eating at Friday’s after every game in Philly. You seen him in that Friday’s, Bentley and everything outside.

Swizz: We’re doing a little bit of both. We’re moving the movement.