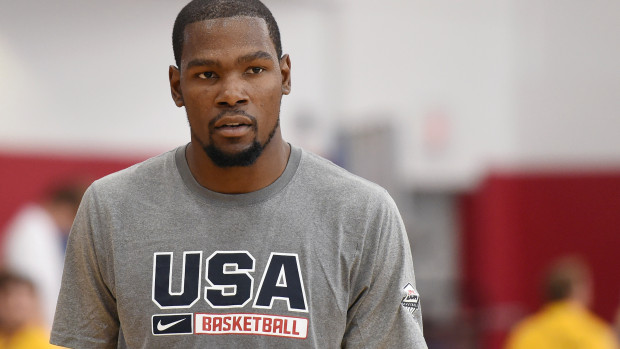 Both guys were likely thinking about their contractual futures, though Durant’s decision in particular—with free agency and a new sneaker deal looming—caught many in the USA Basketball program off guard.

Per USA Today and ESPN:

[USA Basketball managing director Jerry Colangelo] said Durant’s decision was because of his “contractual situation.” The 2014 NBA MVP is under contract in Oklahoma City through 2016, but there’s already speculation he’ll return to his hometown of Washington D.C. when he’s a free agent. And with his Nike contract done, Baltimore-based Under Armour is reportedly making a run at him.

“I wasn’t surprised, and that was predicated on his week in Las Vegas,” Colangelo said. “He had a lot of things on his mind.”

“Yeah, I was,” head coach Mike Krzyzewski said after Team USA’s practice in Chicago on Thursday. “No question. I was.” […] “It’s one of those things; you don’t replace Kevin Durant,” Krzyzewski said. “You look different. And so we have today and [Friday] to look different before we play a really good team. That’s of concern for me because we were pretty far along. We had our best camp ever in Vegas since I’ve coached [Team USA]. Those guys were terrific. We had more in [game plan-wise], but we had more in to play a certain way. And then Kevin deciding not to play … it’s concerning. …. But hopefully we’ll be good enough on Saturday, and then we use New York and Gran Canaria to get better and get better during pool play.”