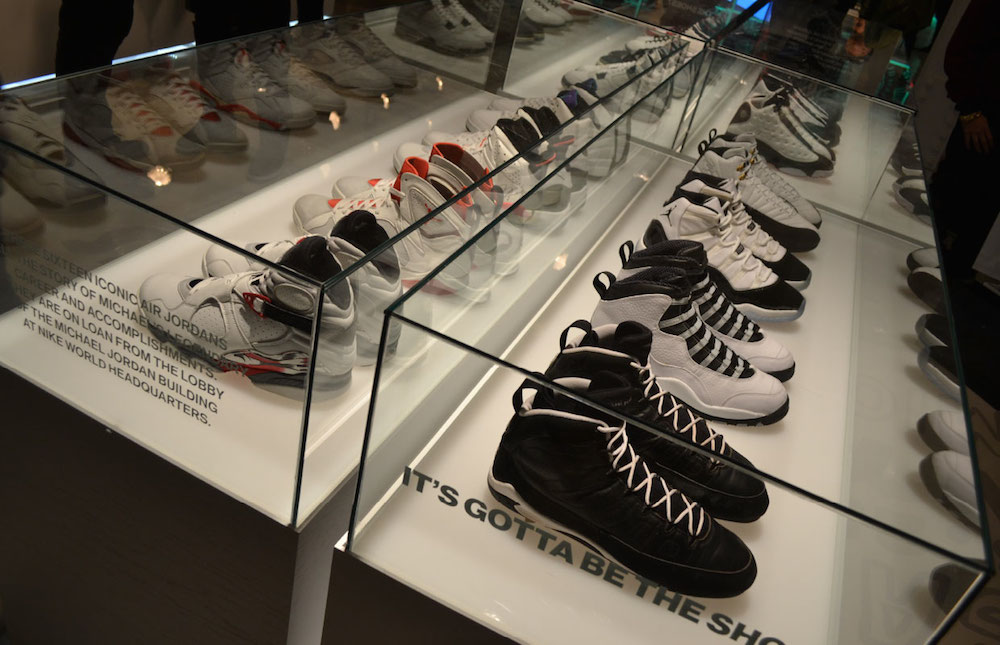 Last night we were able to get a sneak preview of the 166 Flatbush retail experience the Jordan Brand has created in collaboration with Foot Action. The space is located directly across from the Barclays Center—if that isn’t a large enough landmark for you, then look for the largest image of MJ that you have ever seen and just head that way.

The story is a celebration of 30 years of Air Jordan and its effect on the culture and history of basketball. Some of the major highlights that will pull you down memory lane are the full line of Air Jordans, this time dipped in all-red—a unique sight. Call it a “Red October” effect, but seeing every model in the range of Air Jordans immersed in red is pretty spectacular and bold to say the least. From there, you walk immediately into a case of game-worn Air Jordans all worn by the man himself, Michael Jordan.

The shoes come from the archives of the company’s Beaverton, OR headquarters. The juxtaposition of the all red Jordans and their high impact visually with the mixed colorways of what Michael actually wore is beautiful. You see how iconic each color truly is to the Jordan Brand. You can’t say that red is the only thing that is Jordan because each and every game-worn colorway that MJ wore is significant to the brand and their past. It’s where they came from, and where they are going.

And after the game-worn shoes, there’s a game-used court. Yes, court. Michael’s career spanned across two Chicago arenas that he called home (Washington was more like a vacation home, let’s face it) the United Center and the old Chicago Stadium. Each of those stadiums in which Michael won three NBA Championships, the United Center he won 1996-1998, or Air Jordan’s XI, XII and XIII if you count in shoes, and championships 1991-1993, or Air Jordan’s VI, VII and VIII were won in the old Chicago Stadium. The Flatbush space has pieces of the Chicago Stadium court for you to take in. While many of you never saw Michael grace the court, you can still get a feel for the presence he had by taking in those pieces.

The pivotal part of the store was the opportunity to take in Laser Etching a pair of Air Jordan Is. The shoe comes in all-black and features various graphics that have been created to commemorate the 30th Anniversary of the brand. We had the chance to go behind the scenes and take in the whole experience. It’s an exclusive opportunity for you to not only own a piece of history but something that is truly bespoke and one-off to you. There is no shoe that is the same, while all may have the same graphics, the placement moves and each burn is different. It gives you a truly 1-of-1 feel. Moving past that though there is the even more rare all over laser pair they are creating. That shoe takes about 12 minutes to burn per panel and there are three panels they are burning, the toe box and the lateral and medial quarter panels. Add in set up time and each shoe is taking about 45 minutes per shoe or around 90 minutes per pair to etch. They will be burning these shoes for the length of the store opening, until Monday and you don’t have to do the math to understand these pairs are going to be very limited. The brand is expecting between 90 and 120 pairs at the highest.

So if you are in NYC—go and check out the space! If you are a Jordan fan it is a must see, if you are collector you can’t miss out on the laser shoes. Not to mention they have completely restocked the Legend Blue XIs and the Gift of Flight Pack, along with having the All-Star Pearl Collection for sale. All-Star Weekend is officially here, folks.