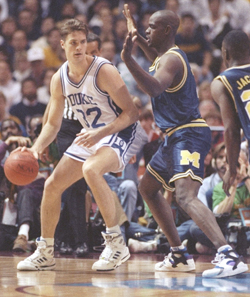 With the Madness going down all around us, I want to start things off today with an apology to all of you who entered last week’s Kevin Garnett UCLA jersey/sneaker giveaway. I’ve kept you waiting too long on announcing a winner. A crashed laptop (RIP iBook G4) and a chaotic week  have me playing catchup. So let’s get to our winner.

We had lots of great entries for this thing that dug up a lot of great memories from the tourney. We got mentions aplenty for Illinois in ’05, a few for Hank Gathers and Bo Kimble, the ’85 Villanova squad, and a lot others. In the end, it

came down to these three entries, from TADone, Clark 13 and the entrant with the strangest/funniest name in here, KobeWearsAPurpleThong, respectively. I’ve pasted my finalists below. If you’re anxious, skip past the entrants to catch our winner.

Tad:
My brotherhood moment would have to be Loyola Marymount and Bo Kimble after Hank Gathers passed away during their conference tourney. Playing on the emotion of Gathers memory, the team made it all the way to the Elite Eight before succumbing to eventual champs UNLV. I especially loved Kimble shooting freethrows left handed in honor of Hank.

Clark 13:
March 19, 1966. It was the day the brotherhood was born. It was a day before public relations and marketing campaigns. It was a day before color TVs and a colored president. It was a day before racial equality. It was a day when a movement began. Not only a basketball revolution, but an entire social outcry was observed. On paper it looks like any other game. Texas Western. Kentucky. 72. 65. What paper cannot capture are the ramifications of that liberating contest. In 40 minutes an entire nation was changed within a gymnasium. Through the looming masses of hecklers and infinite mounds of hate mail, the Miners dug deep into America’s unjust core. Many attribute them with blazing a trail for Los Angeles’ Showtime and Michigan’s

Fab Five, but to simply credit them with changing a sport is blatant disrespect. From biographies to a feature film, the El Paso emancipators will forever be remembered for their unified opposition of irrefutable racism throughout the country, on and off the court. Much like adidas’ new sales pitch, Michael Jordan to the Tar Heels and Tubby Smith’s championship with the Wildcats would have only been a dream. Without their courage, Cinderella stories like Loyola-Marymount and George Mason would have struck midnight long before the game ever began. Hill. Lattin. Artis. Worsley. Fluornoy. Shed. Cager. Haskins. This brotherhood not only saw past prejudice to ignite the hopes of athletes from young to old and black to white, they also wrote history with one lineup. One lineup inspired a society. One lineup served as a beacon for civil rights. One lineup reminded everyone in a country’s promise that all men are created equal. One lineup defied the death threats, defeated the doubters, and triumphed over Goliath. That lineup became the precedent of all brotherhoods to follow. And it all started on March 19, 1966.

KobeWearsAPurpleThong:
My favorite NCAA Brotherhood moment I remember watching took place in 1992. I (and everyone else) thought Duke was finally going to lose. Kentucky was going to knock them off the pedestal. Then came “The Shot.” Grant Hill throws a beautiful baseball pass to Christian Laetnner and the rest is history. Remember Thomas Hill crying because he was so shocked..? Now those guys were brothers-and Coach K was Dad. That team had such a bond between players/players and players/coach it was ridiculous. You had the “little brother” Hurley, the

“older wiser brother”, Laettner the never shakeable “rock of a big brother” G.Hill, and the list goes on. But don’t forget “Dad”, Coach K. As much as I disliked that team because they were just so damn good, they had an unbreakable bond. They always knew what each other was going to do next, and would do anything for each other-true “Brotherhood”….

I kind of feel like Michael Buffer standing in the ring at the end of some weird sort of triple-threat boxing match that went the distance, with the duty of announcing a winner. Ladies and gentlemen, your winner via judges’ decision…

Before anyone with a good memory gets their stuff up in knots, I want to address something. Clark won the KG giveaway we had back in November. I spent a good part of the weekend going over the three finalists and weighed out a few different options. Let me take you through my judging process:

First off, Clark killed it in his reasoning for the 1966 Texas Western Miners team. To me, out of all of the moments in the tournament listed here, the Miners’ win was the most culturally and socially important out of any other tourney winner. The ’92 Duke team may have been the best team night-in night-out out of the three finalists’ topics, and the Hank Gathers/Bo Kimble connection runs deep, no doubt. But the Western Texas team transcended like no other team in college basketball. That starting five was a brotherhood within a brotherhood of that team and it was impossible for me to look past that.

At the risk of stuffing one person’s closet full of exclusive merch in the future, I’m gonna institute a one-time winner policy on all future giveaways that we run on this blog. Just to give some props to Tad and Mr. PurpleThong, we’re gonna set you two up with a little something for your efforts as well. If I haven’t thanked everyone who entered yet, let me put that out there now. I loved reading over everyone’s entries and remembering some remarkable stuff from the last 40-plus years back with college ball.