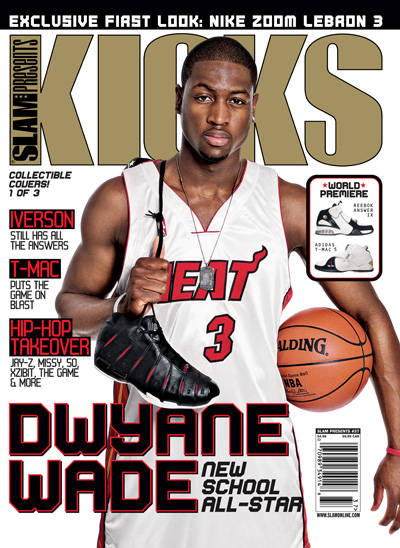 Sneaker Pimp: Interviewing Dwyane Wade for one of our three cover stories, I had to smile when dude referenced an old pair of Jordans as inspiration for his new signature Cons. I interrupted to ask which ones he was talking about, and he laughed and said that, basically, he had no idea. He appreciated them for what they were—great basketball shoes with cutting-edge design and an endorsement from the greatest of all time—and that was about it. For him, it was love, not obsession. Of course he rocked Js—as a Chi City native coming up in the ’80s and ’90s, it’s not as if he had a choice—but for a kid like Dwyane, a shoe needed to hold up on the court and, in his own words, “look good when you wear it with jeans.” What it didn’t need to do, at least for Dwyane, was look good in a box sitting on a shelf.

Feel me? Yeah, I’m talking to you, sneaker collectors. Consider this a call for perspective. I know I’m not the first to broach the topic, and since my personal “collection” numbers in the dozens, not the hundreds, my perspective is different from those of you who dedicate every spare inch of space to rectangles of orange cardboard and have actually slept on sidewalks waiting to cop that next ish.

My point? I’ll let my man Blair Janulis tell it. Blair sent us a letter a while back, along with a couple of pictures, one of which you see above. He tells the story of a pretty impressive collection—“Jordans, shell-toes, Question 1s, Flights, Dunks, etc”—built over 15 years. It tells of the attic in his parents’ house serving as the “graveyard” where all those kicks lived—and where, one day last fall, they died. “On Oct. 5, 2004, my parents’ attic caught fire,” Blair writes. “The attic and much of the house was a wrap. I lost my sneaker collection.” The moral to his story? Here’s how Blair put it: “I really want everyone who reads this to WEAR YOUR SNEAKERS. TAKE THEM OUT AND LOOK AT THEM. ENJOY THEM.”

His point? It’s not life and death, just shoes—little bits of leather and rubber that, when some hungry young designer in Oregon or Massachusetts gets really lucky, look incredibly fresh on your feet and leave an imprint on your brain. But still, they’re shoes, and you’re supposed to wear them. If they were meant for display only, they’d come with little hooks on the back or something.

P.S. Having said all that, we meant what we said on the front about “collectible” covers—Dwyane, AI and T-Mac. The three-for-one is a KICKS first. Cop ’em all!