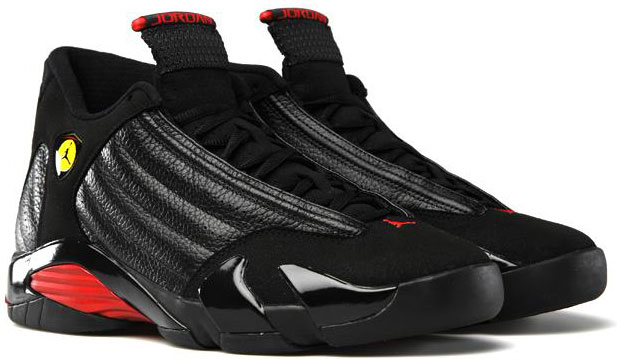 The Air Jordan XIV…or as the Jordan Brand has literally re-branded it, the “Air Jordan 14 Retro.” Great shoe, technically. It could be brand new today and still be top-of-the-line. The luxurious leather, the full herringbone tread (stop with the rubber snake stories, Kobe…errr, Zoom Kobe), and that wonderful, wonderful full-forefoot Zoom Air (not the [email protected]$$ed met head Zoom, either…again, KB24). The asymmetrical collar and the auto influences. Don’t mind if I do, Nike. All that is great, and actually, I may love the XIV more for its features than for its actual feature, but its featured debut is what makes it iconic.

See, there are plenty of readers, a new generation of readers, young patrons and friends of SLAM who have no idea what it means to have seen Michael Jordan on live TV (sadly, I never saw him in person). There are kids who when you might say, “Michael Jordan…,” they say, “Wh-what’s his name?” That’s the world we live in. Michael is the greatest, to me, at least. I do know a few people (one, in particular) who emphasize that it isn’t as easy as an open-and-shut case, but for me, it’s obvious.

Those shoes represent what it means to control your destiny, to go out on top. Most never know when to leave. Some never know when to go. And some of those guys may someday regret having not left when it was still good for them, right David Stern? For me, the AJ XIV is the epitome of going out on top. It’s literally George Costanza as a basketball sneaker. In a world where you may have more challenges to pursue, see and conquer, you leave in the best possible scenario, where you have less to gain and you’ve acquired the most that you can in that place. Remember when George made it a point to leave out on top? A funny joke to punctuate his pre-exit? An unexpected laugh acting as a prelude to his departure? Those shoes that Michael wore were a perfect hand wave to the world. He didn’t have someone to take him out, not like my good friend Carlito Brigante. No, Michael made that train…heck, he BUILT that train.

I wish I had the shoes myself. I saw Richard Hamilton win an NCAA Championship in them, I have a longtime friend (then a serious prospect of Michigan State and Texas) who wore them when we played high school basketball together, and my brother got the 2004 (or 2005?) Retro version in white/black-forest green. I want them for those same aforementioned technical reasons unrelated to Mike’s lone spotlight time in them, but seeing them apart from my feet, all I see is Mike, 18 feet out.

Sandy Dover is a published author, fitness & media professional, and a SLAM web columnist & print contributor whose work has been featured and published by US News, Yahoo!, Robert Atwan’s “America Now” and ESPN. You can find Sandy frequently here at SLAMonline and via his website at About.Me/SandyDover.