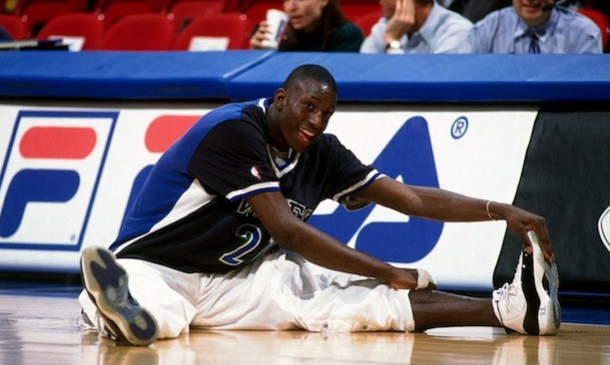 Kevin Garnett’s sneaker game is not unlike Kevin Garnett: mean. His history of kicks might not be the flashiest or the most revered among true sneakerheads, but KG is nothing if not adventurous. Garnett entered the League in 1995 and wore Nikes until 2001, when he signed with then-up-and-coming sneaker brand AND 1. Then in ’04 he joined adidas, where he ran game with fellow KICKS 6 cover boys Tim Duncan and Tracy McGrady before going international in 2010 with China’s ANTA. Can’t knock the hustle.

With a signature shoe from each of the four different brands, to ask “You ever wear the Garnetts?” barely makes sense anymore. But favorites? Sure. (Hint: Air Garnett III). The best part about putting together a timeline of The Big Ticket’s best sneakers is realizing how long dude’s been doing it. No one will dare to call him old again, but when your original shoes are hitting the retro market while you’re still playing…

So with KG’s professional playing days *possibly* behind him—with an outstanding career resume that includes 15 All-Star Games, NBA MVP and Defensive Player of the Year awards and, of course, the ’08 title—we salute him with a look back at the highlights from his wide range of footwear choices. Enjoy!

This gallery was originally published on Garnett’s 36th birthday two years ago, but has been updated to reflect his past two seasons. All photos via Getty Images.