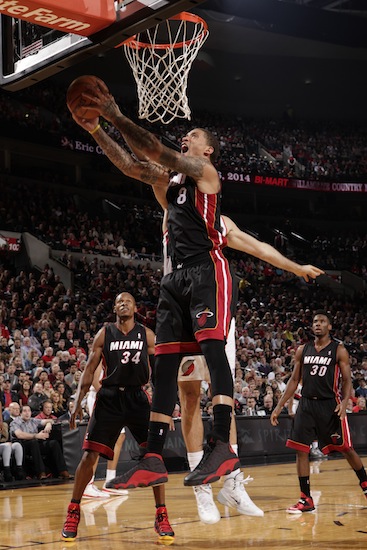 Michael Beasley is a curious dude. He played at a half-dozen high schools from Florida to Massachusetts and won a McDonald’s All-America game MVP before a one-year stint at Kansas State propelled him to the No. 2 spot in the 2008 NBA Draft. Mike began his pro playing days alongside Dwyane Wade in Miami, before issues with marijuana and a string of bad decisions off the court called his character into question, and soon he was shipped to Minnesota in exchange for a pair of second-round picks—essentially dumped for cap space to sign LeBron James. A fresh start brought him career highs in points and minutes with the Wolves, before bouncing to Phoenix and now back to Miami to join the 2-time defending champs.

Throughout his turbulent NBA career, Beaz has pushed the limits of style, from his hair to his tattoos to his footwear. Fortunately for us, we’re not in the business of tracking hairstyles, so we’ll stick to his kicks. Even in the shoe game, Mike couldn’t avoid controversy, signing a deal with adidas as a rookie, then proclaiming he’d “worn adidas all his life,” when in reality he hadn’t stuck exclusively to the three stripes in high school, or college, or even his rookie NBA Media Day. Now, he’s a sneaker free agent, so expect to see even more craziness from B-Easy this season. Until then, enjoy a gallery timeline of Beasley’s sneaker history to present. And from all of us at SLAM, we wish him a happy 25th birthday!

This gallery was originally published on Beasley’s 23rd birthday two years ago, but has been updated to reflect his past two season of sneakers. All photos via Getty Images. Enjoy!