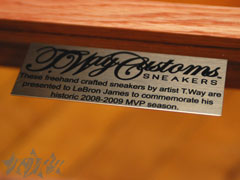 There were a lot of people surrounding LeBron James on Monday when he accepted his MVP trophy in Akron, Ohio. Tyler “T.Way” Way had the most unique connection to the King out of anyone else in the room, though.

The artistic talent behind T.Way Customs, the source of the custom sneaks on many a NBA players’ feet (check SLAM 120), Way was on hand at St. Vincent St. Mary to give LBJ a special something to go along with his MVP trophy. Check out some of his sneaker work here at his site.

As the video details, Way spent over 40 hours freehand painting the shoes before making the five-and-a-half hour drive from his western Michigan home to Akron to present the MVP with his sneaks. I caught up with T.Way Friday morning and we talked about the shoes, his trip to Akron and why he didn’t have any pics of himself with King James.

SLAM: Tell me about this shoe.
T.Way: The shoe is primarily navy, it’s an Air Force 1 and it started out all white. It was inspired by the Cavs’ navy blue alternate away jersey so it kind of has a similar colorway to that. Then on the back I have all these different stats and kind of one-word descriptions of LeBron, talking about his leadership, his family, things like that. Just a lot of different inspirations of LeBron and what he means to the team and the league and every one else. Then on the outside toe is an MVP logo where instead of the V in MVP it’s LeBron doing his chalk routine. It’s a logo I made up for that.

SLAM: What’s the process like for you with this? Are you brainstorming? Is it whatever comes to mind for you with LeBron?
T.Way: It’s a little bit of both. It’s hard to capture a season-long MVP campaign so that’s probably the most difficult part of doing it, just trying to capture all of that on a shoe. A lot of it was what came to mind with LeBron and what kind of player he is, kind of person he is, things like that. I guess you can say that had a lot to do

with it. Then just kind of trying to bring in his overall style. The shoe is kind of clean. A little bit simple, but not overly simple. There was a lot of brainstorming and a lot of it was you make up as you go.

SLAM: Will LeBron wear the shoes, or do you think it’ll be something he keeps on the shelf?
T.Way: I got them in a custom display case, wood and glass-enclosed. It’s a display shoe that he’ll put up in his office or something. When I gave them to him after the press conference, he set them next to his MVP trophy.

SLAM: A lot of people might be able to customize a shoe, but you get to interact with LeBron. How cool is that for you?
T.Way: That was an awesome experience. The press conference was on Monday and I was in Grand Rapids, which is on the west side of Michigan. I was thinking Tuesday would be when they’d do the press conference, then I heard Monday when I woke up that they were doing the press conference that day so I threw everything into my car and drove five-and-a-half hours to Akron to get there on time for the press conference. It was a crazy day. Then when I was able to get to the press conference, standing next to all of the Cavs players…it was a great experience, one of those things that I’ll never forget. It’s something that I never really thought I’d be doing.

It was one of those moments where even if you do have pictures or if you don’t have pictures, you can replay the moment in your mind and it’s something you can always take with you. That’s probably the greatest thing I got out of it is that memory. I’ll be able to tell my kids I was standing next to LeBron when he got his first MVP award. It’s really special.

SLAM: You mentioned the pictures, what happened with your camera?
T.Way: Yeah, actually when I was giving the shoes to LeBron, the battery died in my camera. I didn’t have a chance to charge it or anything (before leaving for Akron) but there was a guy who has some video of it so I’m going to try

and get some footage from him. I got other stuff, pictures of LeBron and the shoes next to the trophy.

SLAM: As far as your custom jobs, where does this fit in?
T.Way: I think Tayshaun Prince was my first one so that was kind of special in that sense. I’ve done numerous pairs for Rip (Hamilton), so that was special as well. But obviously, doing the MVP pair for LeBron, giving them to him on the day he receives the award is special. But each one is kind of unique.

SLAM: What’s next for you?
T.Way: I’m working on a collaboration piece with an athletic apparel company called CRONS, which stands for Come Ready Or Never Start. And I’m doing that with Pat Cavanaugh, he used to play at Pitt. That’s something we’re working on right now. As for sneakers, I’m taking a little mini-break off of that.

SLAM: So are you rooting for LeBron? Do you think the Cavs can do this?
T.Way: Yeah, there’s no reason why they can’t. They’re dominating everyone, hopeuflly they can continue to ride this streak. I’d love to see LeBron get his first championship trophy and maybe who knows, another pair of commemorative shoes for that.