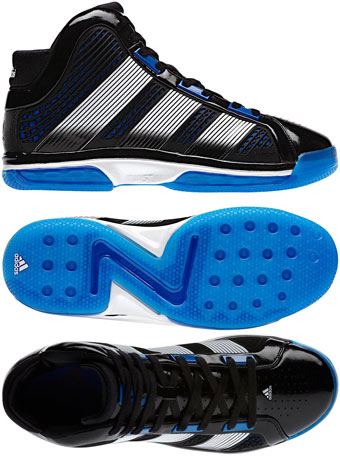 The title of most dominant big man in the game comes with large shoes to fill.

For adidas, trying to find ways to keep those size 18s as sleek and comfortable as possible for Dwight Howard, so he can continue imposing his will on both ends of the court is only half the battle.

average human as it would the two-time Defensive Player of the Year.

In this interview, adidas basketball footwear designer Robbie Fuller talks about that process as well as some of the elements of the SuperBeast that should help continue to lift the Orlando Magic’s big man game to new levels.

SLAM: From “The Beast” now to the “Superbeast,” what did you want to do differently in terms of performance and an aesthetic standpoint?

Robbie Fuller: I think this is a good example. For Derrick, we started off with the Rose and we felt really strong about the tooling so then we just really innovated on the upper and for Dwight, we always work with our aIT (adidas Innovation Team). What technologies and benefits are they working on and when can they be incorporated. We started off with The Beast and Pure Motion, and had more of a lux feel to it and in the back-half of the season, coming down the pipeline; we had these technologies or weapons that we were ready to implement for him. Knowing that beast have weapons, we incorporated a couple of new technologies into his shoe.

For the upper, that’s why you get that basketball-specific Sprintskin. Its super light, super strong and super durable; the super light part because it can be molded to like .5 mm thick and it’s also not a solid, it can be cored out. It’s super strong because if you look at it, the ribs go vertical as opposed to going horizontal and that’s how similar to how stripes – way back in the day, when they were stitched on to a leather piece – gives it a way more strength if they’re vertical. It’s super breathable because it’s on a textile base. You get the strength, the durability and the breathability from the Sprintskin.

We stayed consistent with the stripes from the TS Commander LT. That’s when we kind of came through with this big super stripes or fast stripes. I was like, OK, how do I do that again but in a fresh way? So I scaled them up a little bit more, sort of broke them up into lines, so that they’re not just solid, they’re broken up into lines. Then, added that fade on it. The fade was inspired by when you watch movies and you see something coming to attack its prey, it kind of like sneaks up from behind, comes up out of the water like in Predator – that kind of stealth. I was like, yeah, I’ll take these stripes, and I’ll do a fade off of the tooling, like the stripes are coming up out of the tooling to attack.

The bottom, instead of just doing injection-uva, we have a couple of new tricks and I say tricks in a good way [laughs]. The Nano [cushioning], which is if you look at the bottom with the dots, which really is just clever. You get cushioning because of how much the materials can travel, compress and then go back. So the whole midsole has these little recessed areas where the rubber little tips can go up into that recessed area and then go back down. What that does – we were able to make the midsole lower to the ground but keep the same amount of cushioning. This is a more stable shoe, more stable than anything that he’s worn before in how low the heights

were, but he still keeps superior cushioning.

The Z-TORSION it says “Twist” on the side because it’s just telling you that that’s what you should do. Once you get to the store and get the shoe, twist it and you’ll see, really easy solution, really simple; you twist it in one direction and it really opens up and it wants to travel that way and you twist it back towards the inside and it’s completely stiff. It won’t let your ankle roll over. It’s really simple mechanical solutions. It’s very analog but sometimes, that’s the best.

SLAM: From a styling standpoint and also looking at it from a consumer point of view, how tough is it to find a balance between fitting Dwight’s needs on the court, but still appeal to the masses because as we’ve all heard “Big men don’t sell shoes.”

RF: It’s definitely tough. He’s a big guy, 6-11, 285 pounds. How am I going to build something for him that’s going to look right when I’m rocking it? It comes down to – color and materials are powerful forces in design. We build in the Sprintskin, we build in the Nano and do all that kind of stuff but when you look down at it, what’s the construction? Is it asymmetrical in all of its places or do you keep it a little more symmetrical, so it’s a little more palatable when you get dressed up? That’s what I keep in mind just like what are the areas where I need to innovate and where are the areas where I have to play it a little more reserved so it’s not too much at the end of the day.

SLAM: I talked with Dwight earlier this season about his second half shoe and he talked about wanting to keep it light and something about being sexy was mentioned, I guess just Dwight being Dwight. How much fun is it to work with him and how involved is he with the process?

RF: With him and Derrick, it’s sort of a two-step process. There are the meetings that happen with us, the product team. Those are normally, at least, like two to three times a year because their busy and we’re busy. The calendars don’t tend to align until these couple of key zones, like All-Star or summer time. That’s when we can due diligence, build up a presentation and bring some new different examples. That way they have a little more to pick from instead of just off the top of their head, like, ‘I like blue,’ so it’s a little more to work with. That’s one part.

The second part is through our Athletes Services Team. They talk to these guys like almost on a game to game basis. Getting feedback, what tweaks do they need to make to the shoes they’re in. We have a system where we keep all of that information and we go back to that. The Athletes Services Team updates that system and that way every morning, like my morning coffee, I can read through like, ‘Oh, Derrick’s comment last night was the shoe was slipping a little bit on the outside,’ OK, I need to work that into the next design. That kind of speaks to how often it is.

Dwight’s crazy, in a good way. He’s not a rookie anymore so he kind of understands the process, understands more of the timeline and the constraints. He knows that if we’re there and we’re getting a chance to talk to him that that’s his time to really push through ideas in what he likes to see happen. I can remember last time he came in, dressed pretty nice, button down cardigan and started going through color and material, trying to get a feel for where his head was at style-wise, right now. Whether he needs some of the more animal-type embosses or he did he want a little more reserved, like nubuck. Some of the feedback that I got was let the technology be the big texture and let some of the other areas be a little smoother. That’s what you see when you see the black shoe and the white shoe. It’s more of a leathery-emboss. Not too overly technical because the tech part is the part that’s pretty aggressive.

SLAM: How will Dwight’s line continue to evolve?

RF: With Derrick, he hasn’t been with us as long, so it’s a little more starting from scratch. With Dwight, he’s been on to a few things, so I don’t have an analogy as clean as a book for Dwight but that’s still where we’re at with him. We have a plan and we’re building out like a legacy look-back. Literally, trying to look out ten years and what do we want people to remember about him? Was he the most powerful big man of all time, was he the sexiest big man, the funniest? Clearly, we want him to be one of the fastest big men of all time but a little more personal with some of the jokes. Him singing with Slim Chin, that’s some of the good stuff that’s going to separate him from every other “Big guys don’t sell shoes,” that’s been tried in the past.