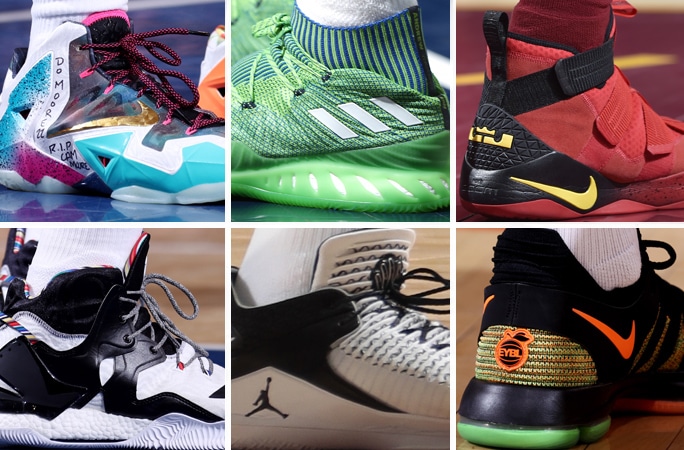 Madison Square Garden was the site for some pretty notable sneakers as the Knicks welcomed the Lakers.

Kristaps Porzingis and Brandon Ingram have some of the best adidas Crazy Explosive 2017 PEs so far this year and both pairs were on full display yesterday. Porzingis went with his predominantly blue pair while Ingram rocked his purple number. Jordan Clarkson made sure to appease sneakerheads as he rocked the eye-catching “What The” Nike LeBron 11. Kyle O’Quinn got in on the fun with a wear of the “Arthur Ashe” adidas D Rose 7. Michael Beasley continued to rep the KD line heavy as he wore the “EYBL” Nike KDX.

In Dallas, Kawhi Leonard made his season debut last night and he had on a PE model with the Air Jordan XXXII Low done in white/black/grey colorway and adorned with his signature hand logo on the tongue. Pau Gasol had on his simple white/black Nike Hyperdunk 2017s while Dirk Nowitzki continued with his PE Hyperdunks.

Closing out, we circle back to the adidas Crazy Explosive 2017 as Andrew Wiggins donned a fresh green number and Jamal Murray went off  for 28 points in his custom Nuggets joints.

The rest of Tuesday’s best NBA kicks is just ahead.