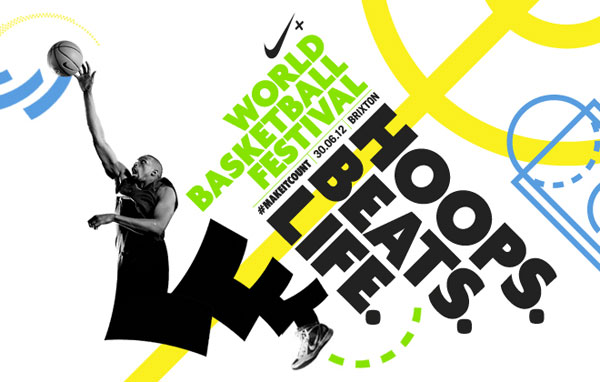 It’s looking like a pretty good summer to be a UK-based basketball fan/writer. We’ve got the Olympic tournament just around the corner, with the best players in the world (injuries aside—DRose, you will be missed) heading to our shores for the first time, and the superstars of the US team taking on our own Great Britain team in an exhibition game in Manchester.

To top it all off, Nike has announced plans for World Basketball Festival London, a one-day celebration of the game and basketball culture, taking place Saturday, June 30 in Brixton—the spiritual home of British hoops.

The festival will see a packed schedule of clinics, games, events and exclusive appearances from Nike’s global athletes and guest music acts.

During the day, World Basketball Festival will take over the Windrush Square area with a specially installed full-size court and bleachers, and free events for the local community. Festival goers will be able to take part in open pick-up runs, dunk contests, and try out the much hyped Nike + Basketball shoe, while young hoops-heads from across London will get the chance to learn from Nike’s top international athletes and coaches in a series of clinics.

The free daytime festival culminates in a full five-on-five game between New York’s Team Nike, winners of the Dyckman Championship, and a British all-star team.

At night, the party moves to the O2 Academy Brixton, where Nike will be putting on a showcase of the best of hoops culture—dunk contests, dance crews and more—all headlined by a top secret, to-be-confirmed act (described by our friends at the Swoosh as “US hip-hop royalty”). Tickets will be on sale from Saturday, May 26 for just £5 (that’s around $8, my American friends—cheap enough to justify that flight over, if you ask me), and all proceeds go to the Luol Deng Foundation.

We’ll have more information on World Basketball Festival, and everything else going on this summer in London, right here on SLAMonline, so watch this space.