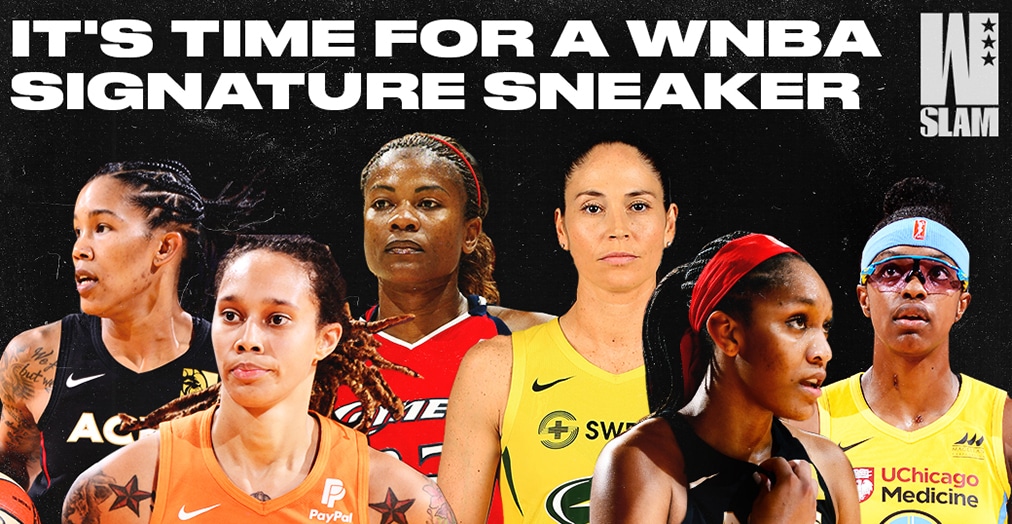 It’s time for a WNBA player to have a signature sneaker. Real talk. It doesn’t matter who it is. A pair from the Swoosh for A’ja Wilson out in Vegas. Or a Three Stripes joint for Candace Parker in LA. Or something for Sue Bird and Diana Taurasi, the W’s resident legends.

Taurasi had her own kicks back in 2006. The Nike Shox DT came and went quickly and it’s already, unfortunately, been forgotten. It was a funky-looking silhouette built on Nike’s patented Shox technology. The cushioning was mixed with Zoom Air and it trailed up to a big overlay that covered the midfoot and eventually wrapped around the collar. Taurasi only played in them for one season. She’s been playing in LeBron PEs ever since.

Taurasi, a three-time WNBA champ and four-time Olympic gold medalist, is the last woman sponsored by Nike to get a signature sneaker. The last woman to get a signature in the WNBA is Parker, who has two WNBA MVP trophies, two gold medals and a WNBA title. She’s consistently been laced in the latest adidas options ever since the early 2000s and adidas hooked her up with three of her own pairs, the last of which was in 2012 when the Ace3 came out.

It’s a stark, stark contrast from when women’s basketball exploded into the mainstream in the mid-’90s. Chamique Holdsclaw, Dawn Staley, Lisa Leslie, Cynthia Cooper, Rebecca Lobo and Nicki McCray were all given their own kicks by Nike, adidas, Reebok and Fila back in the day.

And then there was Sheryl Swoopes, a pioneer in basketball sneakers. Nike made seven different signature sneakers for Swoopes and she wore them as she was winning four consecutive WNBA titles with the Houston Comets and three Olympic gold medals. The impact of the first Air Swoopes still moves the Hall of Famer.

“I remember going to Portland, walking in the room and just seeing all of the stuff,” Swoopes told SLAM at the 2019 WNBA Draft about the first time she saw her signature sneaker. “It seemed so surreal to me at the moment. To walk in and, not only see any shoe, but to see my shoe, with my name on it, and to know that there were gonna be little girls out there, and hopefully little boys too, that have an opportunity to wear a women’s basketball shoe… I love Michael Jordan, but you don’t have to go and buy the Air Jordans anymore. You can go and buy the Air Swoopes. Even today, to say that, I’m like, ‘Wow that really did happen.’ I still get emotional to this day when I think about it.”

But there hasn’t been another player able to feel that type of emotion in nearly 10 years. Even as the talent level has soared across the W and players have taken strong stances against political and racial injustices, developing rock-solid personal brands, no company has stepped up with a sneaker.

The most that the brands do is give a select few players their own team-specific colorways. Parker is always playing in purple and gold kicks, Bird has been given the reigns to the Kyrie line and Taurasi has gotten Phoenix Mercury-themed LeBrons ever since Nike did away with her sneaker. Some of the league’s best young players get featured in marketing campaigns by Nike and adidas, where the spotlight shines on them briefly. But it’s not enough for Breanna Stewart and Nneka Ogwumike, two former MVPs, to get a couple of seconds of airtime in a branded Instagram video that also shows men with their own kicks.

If the high level of skill and the social awareness weren’t enough, the W is filled with huge sneakerheads, now more than ever. There will be old pairs of Kobes, the newest adidas and a wild custom pair on any given night during the summertime. Sneakers matter to them and to their fans.

“I remember in middle school I had Cynthia Cooper’s sneaker,” the W’s Sneaker Queen, Tamera Young, says. “Our team, actually, had it. It’s something for the kids as well that looks up to us. If you had WNBA players that have sneakers, it’s something that little girls could look up to.”

“It would just be an inspiration to young players to be able to wear shoes of their favorite women’s player,” the Chicago Sky’s Diamond DeShields says. “Visibility is key. I believe this would help promote that and ultimately contribute to the common goal of growing the league as a whole.”

The 24-year-old DeShields debuted the “Chicago” Air Fear of God 1 recently, a move co-signed by the sneaker’s designer, Jerry Lorenzo. He personally thanked DeShields in an Instagram post that went out to his one million-plus followers.

“It’s all a part of the evolution of the sport,” DeShields says about a woman having her own sneaker. “At what point is it gonna become normalized for women to share the same platform and opportunities as men? ‘Never’ won’t last in regard to this question so why not now?”

Like DeShields, a few women have been able to show off high-profile pairs. The Aces have a heavy-hitting duo in Wilson and Kayla McBride, both in terms of bucket-getting and sneaker-wearing. Wilson is the first WNBA player to get player exclusive Adapt BB colorways. She first rocked her personal colorway of the auto-lacing sneaker at NBA All-Star Weekend and then went on to debut the “Air MAG” Adapt BBs. And McBride was the first to launch the “NASA 50” colorway of the PG3. Tina Charles and Odyssey Sims got to break out the “SpongeBob” and “Patrick” Kyrie 5s. And the first player to wear the Nike Freak 1 on-court wasn’t Giannis Antetokounmpo or one of his brothers—it was Dallas Wings rookie Arike Ogunbowale.

“We’re at a time where we deserve our own signature shoe,” Wilson says. “It would help the WNBA’s evolution because that’s just a huge step of getting us out there as players. That is a big step. Of course, my favorite Dawn Staley and Sheryl Swoopes, they had their shoes but we need to bring that back. It brings a lot more coverage to our game and notice to our game. That’ll just help our game evolve.

Go down the line and look at the rest of the league and you’ll find ‘heads on every team, players that not only mess with sneakers but that can also truly hoop. Jewell Loyd, Elena Delle Donne, Chiney Ogwumike, Kia Nurse and Seimone Augustus are a few of the best players in the WNBA and a few of its biggest sneakerheads too.

Augustus, a future Hall of Famer that has four rings with the Minnesota Lynx, has been wearing customs for the last two seasons thanks to Salvatore Marcum. Marcum runs Mpls Customs and, in addition to working with Augustus, has also worked with Collin Sexton, Langston Galloway, Josh Okogie and a handful of NFL players.

“These women work harder than anyone I know,” Marcum says. “The passion is there, the love for the sport is there and the signature shoes would be a great step in the right direction for them as a whole to reach the publicity they deserve.

“Seimone’s a player I personally look up to,” Marcum continues. “We’ve done a lot of shoes together to bring awareness to things, such as the ‘Care Bear’ shoes for Pride Month and the native shoes for Native American Heritage Night.”

As Marcum notes, Augustus is one of the players that uses her platform to highlight what’s most important on a personal level. Los Angeles Sparks rookie Marina Mabrey recently did that too, when she used her platform to go after the incessant trolls that constantly leave sexist comments on social media. Mabrey rolled up to a game wearing a shirt with an image of a basketball court that read, “This is my Kitchen.”

“Sneakers are a symbol of a favorite player no different than a jersey,” Mabrey, a collegiate national champion at Notre Dame, says. “The more involved the fans are, the better the league will be. The evolution of basketball begins with participation of the fans. When young girls express their love of the game, we want them to want to be WNBA players.”

Mabrey agrees that a WNBA player with a signature sneaker would help to grow the women’s game and showcase all the skill that doesn’t get highlighted enough. DeShields seconds that.

“It would just help create more iconic players in the league,” DeShields says. “The biggest stars of the NBA have their own shoe, so I think creating that hierarchy within the W would only elevate the popularity of the game as a whole.”

It would also celebrate this group of the world’s best basketball players. It would be definitive recognition of the work they’ve put in and the respect they deserve. In basketball, the sneaker is a status symbol, a marker of the elite. It doesn’t get more elite in women’s basketball than the WNBA.

“It’s super important for us, as women, to have a signature shoe,” the Phoenix Mercury’s Brittney Griner says. Griner’s list of accomplishments runs deep. She’s got a WNBA title, an Olympic gold medal and two DPOY trophies. Plus, when she was drafted in 2013 as the No. 1 overall pick, she was signed by Nike as part of a trio with Elena Delle Donne and Skylar Diggins. It was a big signing at the time but all Griner has to show for it is a couple of PEs through the years.

“With our league being around 20-plus years now and all the hype behind us, women’s sports across the board, from Serena [Williams] in tennis to Megan [Rapinoe] kicking ass at soccer, it’s really time,” she continues. “Everybody always asks, ‘Where’s the shoes?’ It’s not just girls asking. Guys are asking. It’s time to test the waters. Not a shoe where we already had it and we throw a name on it. Actually sit down with the player, let them design the whole shoe and get it out there. Across the board, all brands, everybody. Everybody needs to start doing it. It’s time.”