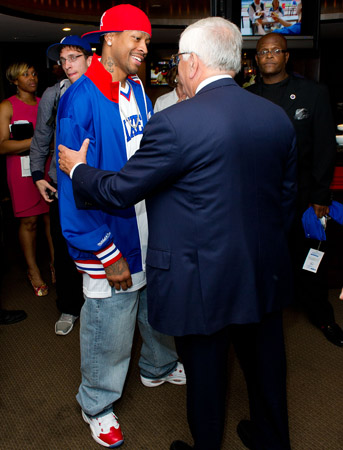 When word leaked yesterday morning that Allen Iverson would be in attendance for Game 6 of the Eastern Conference Semifinals series between the Philadelphia Sixers and Boston Celtics, everyone knew it would be an emotional visit, a memorable visit.

No one knew quite how special it would be, though.

At about 10 minutes after 8 p.m., with a sellout crowd of deafening proportions cheering out in unison, Allen Iverson walked out on to the court at Wells Fargo Center. As the crowd grew to a fever pitch, Iverson—joined by Josh Harris, the Sixers’ majority owner—cupped his hand to his ear and sauntered over to the referee at midcourt. With his legs wobbling from the overwhelming emotions, Iverson—who at that moment feared breaking down on the court—turned around, hugged some of his former teammates and beat a hasty retreat off the court.

It was a special moment. It was a beautiful moment.

That wasn’t it for his night, though.

Between signing autograph after autograph for young kids, between posing for picture and after picture with adoring fans, Iverson found some time to engage in some small talk with Julius “Dr. J” Erving and David Stern. Finally, after seemingly playing host to 20,000-plus people in an arena that was once again his home, Iverson sat down and took in the game, an 82-75 Sixers victory.

Plans for Iverson to attend a Playoff game had been in the works for nearly a month. But with Game 6 being the biggest Sixers home game since, arguably, the 2001 NBA Finals, and with his original shoe—the Reebok Question Mid in a red/white colorway—due for a limited re-release this weekend, a mutual agreement was made that last night was the perfect time.

And perfect it was.—Tzvi Twersky