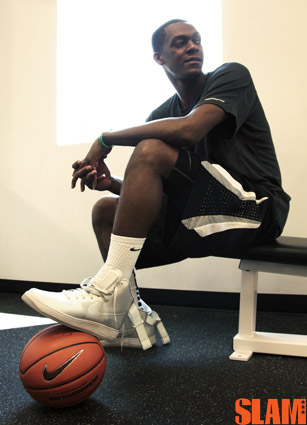 For NBA fans, the summer of 2011 has been more than a little disconcerting. With NBA players locked out by the owners, we’ve seen summer league canceled, free agency fried, trade season toppled, along with an endless stream of rumors about which players may or may not consider playing overseas. Basically, there hasn’t been much for NBA fans to dig into. So instead of looking ahead, fans have been forced to look back, with mostly just their memories to keep them company. For Boston fans, seeing their Celtics go down to Miami in the Eastern Conference Semis was a tough way to end the season, and a bad taste to leave in their mouths. And at one point, they might have thought they were seeing their point guard go down, too. If so, they didn’t know Rajon Rondo very well.

If there were any questions about Rondo’s toughness, he answered them now and forever and ever and ever in Game 3 of the Eastern Conference Semis. The Celts trailed the Heat 2-0 but returned to Boston and were sitting on a lead in Game 3 when Rondo took a spill. His left elbow bent at an angle that elbows are not supposed to bend, and Rondo had to be helped to the locker room. The elbow was dislocated, but somehow, back in that locker room, while everyone in the Garden gasped for air, they managed to relocate his elbow. Shortly thereafter, Rondo trotted back out on the floor for the start of the fourth quarter, his left arm dangling uselessly by his side. He immediately resumed his customary role, handling the ball, darting into passing lanes, directing his teammates around picks and screens. With one arm. Sure, when Rondo returned the Celtics had a lead and looked like they were in control. But Rondo’s return pushed the Garden crowd into a frenzy, and it gave the Celtics—at least on that night—an insurmountable emotional lead. And it gave Boston fans a memory to hang on to going forward, the notion that nothing, not even the basic laws of human anatomy, are able to stop Rajon Rondo.

The Celts feature a Big Three of Kevin Garnett, Paul Pierce and Ray Allen, but it’s Rajon Rondo who makes the whole thing work. It’s hard to think of a player in the NBA who plays a game that’s as unique and uncommon and effective as Rondo. He plays from unconventional angles, zipping to the rim, then flinging the ball out to the three-point line. He sinks teardrops, occasionally punctuates breaks with a dunk, makes throwing one-handed bounce passes look as simple as bouncing a tennis ball, and he’s tireless defensively, as evidenced by his recent back-to-back nominations to the NBA All-Defensive First-Team. And he always plays with tempo, tempo, tempo. In a League where we so often look for absolutes, Rajon Rondo’s game has shading; it’s subtle when it needs to be, screams when it has to be heard.

In the era of the point guard, Boston has a keeper. And with Championship rings (Rondo has one) and All-Star appearances (two) and SLAM covers (one, so far), some level of acclaim generally follows. Yet tucked in nicely behind the Big Three, Rondo exists just below the surface, bubbling up in box scores and highlights, yet, until now, not as much in commercials and ads. As he told us a little over a year ago in SLAM 140: “I don’t have to be the man. I don’t have to be on every billboard in Boston, be the face of the Boston Celtics. If that’s not me, that’s not me. I’m fine. I’m low-key… There’s people who want it. And then there’s people who do deserve it, but could care less. Me? I’m cool.”

Rondo might have placed himself in the category of guys who care less, but he’s also obviously one of the guys deserving of attention. Now, as the face of the Nike Zoom Hyperfuse 2011, he’s getting his close-up. And for a shoe all about performance and speed, it’s hard to think of a better fit to front it than Rajon Rondo.

The Nike Zoom Hyperfuse 2011, which comes in a mid- and low-cut, is a shoe that cuts a striking silhouette, jutting up high around the tongue to provide rock-solid ankle support while retaining a sleek, smooth shape throughout. If there was any question as to the goal of the shoe, Nike answered it with their commercial showing a basketball player using a blender to “fuse” all manner of things representing speed—from cheetah milk to a stopwatch—to form a Hyperfuse 2011.

While the Hyperfuse 2011 looks measured and refined on the outside, there’s plenty going on behind the scenes and under the seams. The Hyperfuse 2011 is composed of three layers—one for stability, one for breathability and the third for durability. The composite construction creates a substance made from three materials (synthetic textile, mesh and thermoplastic urethane). A seamless mesh innersleeve provides ventilation and comfort, while foam cushioning in the collar provides comfort and an enhanced fit in the heel.

“The Hyperfuse upper, which really brings that breathability and durability together, is a composite system adding this layer of skin in zonal kind of regions of the foot,” explains Leo Chang, Nike Basketball Design Director. “And then we have actually a lateral stability wing in the midsole that keeps you on the foot bed of the shoe with this higher side wall and midsole wrap. And with that too, taking some of the bulk out of the collar in the 2010 Hyperfuse and engineering some structure back into it without all of the bulk, and then zoom cushioning in the forefoot for that great responsive toe off.”

There may be a lot of pieces to the Hyperfuse 2011, but like any great team, it all works together toward one goal. For a player like Rondo, who sticks close to the ground and relies on changing direction and speed, its 12.5 oz. weight is inconsequential enough to keep him zooming for a while. And to leave Boston fans great memories for years to come. We caught up with Rondo at the end of July to talk about the Nike Zoom Hyperfuse 2011.

KICKS: I know the Hyperfuse campaign says, “There is no offseason.” How is that true for you?

Rajon Rondo: Well, I can’t do anything right now, because I haven’t got cleared yet to start working out (due to injury). So right now it is the offseason for me.

KICKS: How long do you usually take off from basketball in the summer?

RR: It depends. Usually we’ve been going pretty deep into the Playoffs, so I’ll take maybe three weeks, four weeks off, then get back into things.

KICKS: How has what’s been important to you in a shoe changed the longer you’ve been in the NBA?

RR: Probably just…changing directions is what’s important for me—what shoe is able to grip the floor, along with my ankle not rolling at the same time.

KICKS: As far as shoes go, what was more important to you earlier on?

RR: Pretty much, I loved low-cuts. Since the Hyperfuse, I’ve been in mid-tops. But I go back and forth every once in a while. But the most important thing is ankle support. I like to support my ankle but still be able to move. The Hyperfuse are very light so I’m able to do what I do best as far as my quickness and me being able to get up and down the floor.

KICKS: Is this the lightest shoe you’ve ever worn?

RR: It’s up there. It’s a mid-top shoe, so it’s a little bit heavier, but it’s pretty light. It’s probably the lightest mid- or high-top shoe I’ve ever played in.

KICKS: Did you wear low-tops growing up, or have you always needed the ankle support?

RR: I always wore low-tops. In college I went back and forth between the Huaraches and low-cuts. But pretty much low-cuts.

KICKS: And the main reason you wore the low-cuts was just because of the weight?

KICKS: You’ve played in the Hyperfuse; how does it help you to be more effective?

KICKS: Style-wise, what do you like about the shoe?

RR: It just depends what mood I’m in, really, or what game. I like a clean shoe, pretty much all solid, whatever color we’re in. And I’ll mix it up every once in a while with different colorways.

KICKS: Is the Hyperfuse the kind of shoe you’d wear to work out in, even if you’re doing workouts other than basketball?

RR: Yeah, I work out in them, doing my off-court training, depending what I’m doing off the court. If I’m jumping or running, I’ll wear them. If I’m not, I’ll put on some other low-cut training shoe.