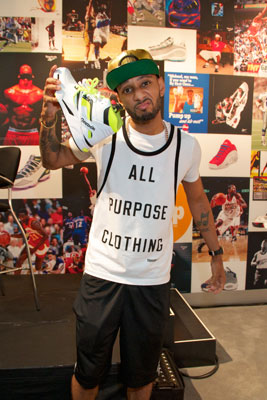 Did you know that Dominique Wilkins was born in Paris, France? His father was a member of the US Air Force and stationed there. And that he was drafted by the Utah Jazz as the No. 3 pick in the 1982 Draft but refused to play in Salt Lake City, resulting in a trade to the Atlanta Hawks?

Looking back on the illustrious career of the Human Highlight film is a beautiful thing. The NBA Hall of Famer made a great impact on the hardwood and he is being celebrated this week by his Reebok family with the re-release of the Twilight Zone Pump, in stores today and available online. Nique was in Las Vegas at the Project trade show on behalf of the brand on Monday, sharing a stage with AI, Reebok Creative Director Swizz Beatz and rappers Tyga and Rick Ross, to reflect on the company’s heritage and future collaborations.

At the event, Dominique recalled his friendly rivalry with Michael Jordan, both on and off the court. In a 1989 Reebok ad, Nique—sporting a fresh high top fade—advises MJ to “pump up and air out” with a Reebok pump sneak. While on the stage, Nique said MJ wasn’t too pleased about the spot, but it was all in jest.

One of the most popular models in Reebok’s unique archive, the Twilight Zone Pump features a white neon colorway mixed with yellow, black and red. It was one of the most highly advanced basketball sneakers of its time, and the brand was very proud of its combination of pump and ERS technology. Dominique wore the shoe in 1990 and secured his second victory in the NBA Dunk Contest in it. The re-release features the original colorway and will retail for $119—available at Foot Locker, Jimmy Jazz, Villa Sheiks and City gear.

In the videos below, Nique and Reebok Marketing and Entertainment Director Todd Krinsky discuss the history of the shoe and some of the commercials from that particular era. And peep that old pump commercial Wilkins starred in for Reebok in 1989. Classic.