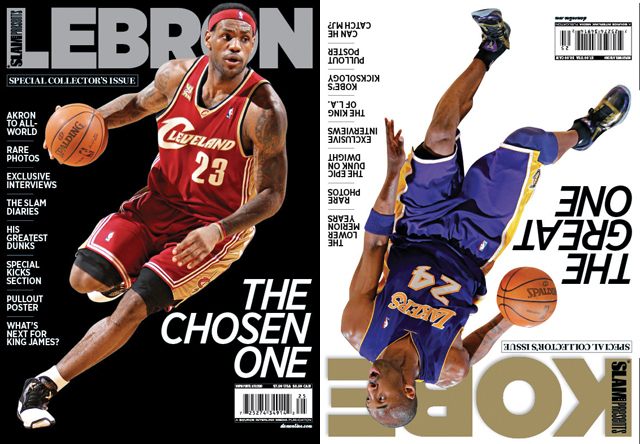 Oh, how I dreamed of walking into the media room at the Finals and dropping this on the table that holds the day’s clips, quotes and stats…

But hey, shit happens. The Cavs were worse than we thought, and the Celtics were a whole lot better.

Those dreams were just about the ego boost that comes from timing something right, though—they don’t reflect on a product that isn’t about this month anyway: It’s about careers.

Simply put, Kobe Bryant and LeBron James exist on a different level than the rest of the players in the NBA. Even if there are nights when other guys can play as well as them, there are never nights when anyone is a bigger star. This is true on TV, in arenas, and, increasingly, around the globe.

SLAM’s publisher and I—with the backing of the rest of our staff—have been wanting to do an issue like this (flip covers, 100 pages, with each guy getting 50, and a dope pullout poster in the middle to separate them) for a good 18 months now. But it took time to gather up the stories, build up the photo archives, and get Nike on board with some ad support. We finally got all the key commitments around late March and slotted this in to drop during the Conference Finals. Well, here we are.

Again, the professional side of me wishes LeBron’s Cavs were still on a collision course with Kobe’s Lakers to play in a Finals that might have set TV ratings records for the NBA. But the fan side of me, who has obviously

read through this issue 20 times already, knows that the mag—which will be on newsstands for three months and at simbackissues.com until it sells out—is great regardless of who is playing in the Finals.

What makes it so great? Hard to know where to even begin answering that question.

We re-ran the best cover stories we’ve ever done on these guys, done by writers such as Cheo Hodari Coker, Scoop Jackson, Russ Bengtson, Ryan Jones and Lang Whitaker. We ran incredible photos, from exclusive shoots of these guys in high school through incredible action photos that we combed through Getty Images to find. We wrote new stories about them both, covering everything from their early days as players to their on-court footwear histories to their current roles as the NBA’s biggest names.

Trust me: if you like one or both of these players, and/or just want a keepsake of NBA basketball in 2010, you need this magazine. Look for it on newsstands everywhere next week.