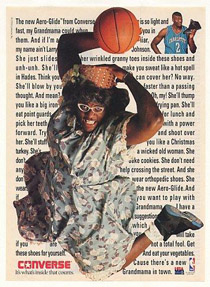 Every year, hundreds of basketball sneakers are produced, issued, sold, and played in on the hardwood worldwide, and for every year in the NBA, at least one star player has a special season that is the peak of his career—and a signature shoe that shares in his glory. That’s what Sneak Peak is all about—highlighting players and their sneakers from the past 25 years who shared the spotlight with iconic play and iconic style.

1991-92 was the coming of age season of the NBA’s 90s experience. There was the awareness of the Persian Gulf War. Magic’s abrupt retirement and then subsequent comeback at the ’92 All-Star Weekend. Larry Bird had a final season with the Celts of Boston. Michael and the Chicago Bulls were the new kids on the block looking to compete for, and eventually win, their second consecutive title.

… And then there was LJ.

Larry Johnson was the No. 1 overall selection by the Charlotte Hornets in the 1992 NBA Draft, and he was a beast coming through the League. A famed hero/villain of the electric University of Las Vegas-Nevada team in the late 80s and early 90s, there was little doubt that he would be the next mega-superstar. Standing 6-6 and made of 250 pounds of pure diesel muscle tissue, Johnson was explosive, powerful, quick, nimble, an uber-athlete…he was in many ways the specimen and anomaly that LeBron James is now known to be, but in a package Charles Barkley wished he could’ve been in. Becoming the Hornets’ first true franchise player was significant all on its own, and in retrospect, LJ’s most significant year might have been his very first year in the League.

Playing all 82 games, averaging 19.2 points and 11 boards on 49 percent shooting from the field and making free throws at an 82% clip, Johnson was headed places. He was new, he was fresh, he wore teal! LJ was everything that Rodney Rogers was projected to be, the Barkley people thought he was gonna be, the next one everyone knew he was meant to be. A dominant post player with the ability to play small forward and power forward with equal soundness, a slasher who could pound the rock and brawl inside for rebounds and shoot a long-distance J. He was an exciting All-Star Slam Dunk Contest participant and the 1992 Rookie of the Year, even; he wore the number 2—that in and of itself was fresh and new, somehow. Soon enough, a star with a chevron came in his

life, and the Larry that everyone was witnessing became another person altogether—he became your Grandmama.

Converse introduced the Aero-Glide in that very same rookie year of Johnson’s. Clad in a dress, Miss Daisy glasses, and a wig and hat combo that wreaks of “old church lady,” Grandmama challenged to best anyone who want a piece of “Larry’s” grandmother, schooling cats any and everywhere all while wearing the footwear of a star.

The predecessor to the famous Converse Aero Jam, the Aero-Glide was probably more important and significant as it was the base from which the Aero Jam was made. Based in black synthetic suede and teal accents with a then-new mid-cut on the sneaker, Johnson did work. Plastic side supports and a midfoot-tongue clip supported and protected the foot and laces, and it was even more popular for its “pop”, as the black tongue read boldly “CONS Aero-Glide” in teal blue.

Eventually for Johnson, he remained in Charlotte just a couple of years afterward, becoming a tandem with Alonzo Mourning. The tragedy of his career remained in the injuries sustained to his back while still with Charlotte, leaving him less able to compete in the athletic manner he had upon his arrival in the League. LJ eventually found later success with the New York Knicks, though, Grandmama never ever showed up. After a convert to Islam, an (in)famous four-point play and a full-bodied 10-year career, the former UNLV star retired in 2001.

The Aero-Glide’s, on the contrary, have yet to return to their former retail glory, but their successor in the Aero-Jam has been re-released various times since their ’91-92 arrival. Better yet, the Converse brand, after years of feas

t and famine, great highs with React Juice technology and epic lows of bankruptcy (with the ambiguous Balls technology presently off to the side), and a period of inactivity and market indifference, the brand was bought by Nike and has returned to become a dominant force in the casual wear (read “hipster”) world.

Larry Demetric Johnson, Grandmama and the Converse Aero-Glide—gone from the game, but not forgotten.

Sandy Dover is a published author and writer, artist, fitness and shoe enthusiast, as well as an unrepentant Prince fan (… seriously). You can find him frequently here at SLAMonline, as well as at Associated Content and Twitter.