Rocking a Nike LeBron 14 PE, Diana Taurasi waltzed into the lane during the second quarter of last night’s game against the Sparks to make a right-handed layup that gave her 7,489 career points–most ever in WNBA history.

After this bucket, Diana Taurasi's number one on the WNBA's scoring list. (via @WNBA) pic.twitter.com/O6XWHSXgdw

Taurasi’s been wearing LeBrons consistently for almost a decade. And it makes sense. She’s been the best player of her generation, just like Bron. As one of the most devastating hoopers in the world, Nike’s hooked her up with exclusive colorways that King James doesn’t even have, like the black joints she was wearing yesterday.

Taurasi unveiled her gum-bottomed LeBron 14s a few weeks ago. They have purple and white accents and feature “DT” on the heel of the left sneaker. 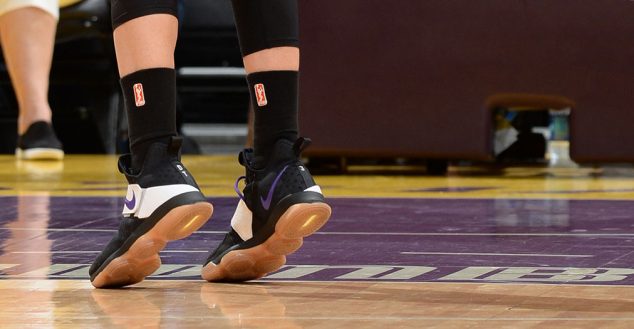 The 14 has a big midfoot strap, marking the first time since the 5 that a LeBron signature sneaker was built with a strap (the Soldier series isn’t technically part of the King’s signature line). The 14 brought back the outsole pods, which minimize impact by absorbing contact. It’s also got Zoom in the midsole and a perforated mesh upper.