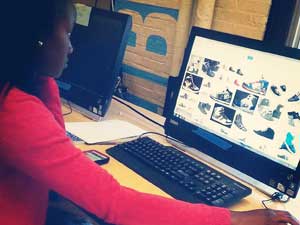 If someone had told me sneakers and education were an ideal partnership, I would have scoffed at the idea. But if that “someone” happens to be fellow SLAM contributor and a doctorate in urban education, Dr. L.A. Gabay, I respectfully listen—and even entertain—the thought.

This past September 27, I was rewarded for my selective open-mindedness. Urban Word NYC’s annual “Preemptive Education Conference,” hosted by New York University and Columbia University, featured twenty 90-minute pedagogical workshops over a four-day period. Ranging in subjects as diverse as “social responsibility in the media age” to “youths creating youth literacy programs,” “Sneakers 101” made the cut as a crucial part of the repertoire. Indeed, sneakers are (and have been) an obsession of most young people and they view the footwear as part of their cultural identity. It then makes sense that innovative educators are engaging students by tapping into their passions.

Presented by Dr. L.A. Gabay and followed by sneaker nerd royalty, Charley Hudak and Samuel del Pilar, Sneakers 101 attendees were given an overview of athletic footwear history, the rise of sneaker sponsorship and kicks as a resonant mode of urban youth expression. As a teacher at Brooklyn Democracy Academy, a “transfer” high school for under-credited kids, Gabay noted how his own love and geek knowledge of sneakers provided an effective gateway to reach otherwise academically apathetic students. Hudak and del Pilar later expanded upon their own personal experiences as both sneaker designers and founders of grass roots, kicks-centric educational partnerships (respectfully, Tread Project and Sneakers for Success.)

The presentations were impressive—not just for the sentiment or ardor—but because they confirmed actual results. From Gabay’s classroom to the beneficiaries of Tread Project and Sneakers for Success, this shoe genre has galvanized kids to the point of significantly improving school attendance as well as overall performance across the subjects of math, science and art. Furthermore, many of the students have gone on to higher education—a prospect that was unlikely, if not impossible, without this intervention.

While Gabay, Hudak and del Pilar were quick to point out they were not aiming to create new sneaker designers, they did stress how the footwear served as an entrée to educating urban adolescents. This may seem counter-intuitive to traditional scholarship, in which kids “learn up” to their instructors. But then again, it wasn’t a motivational speaker, a field trip, community service or even threats of non-graduation that motivated these students to learn; it was fashionable, athletic footwear. So if sneakers are the platform from which to engage at-risk youth, I’m convinced it’s a slam dunk.