Some stuff from L.A. on the new Kobe shoe. (JFK to LAX to JFK) 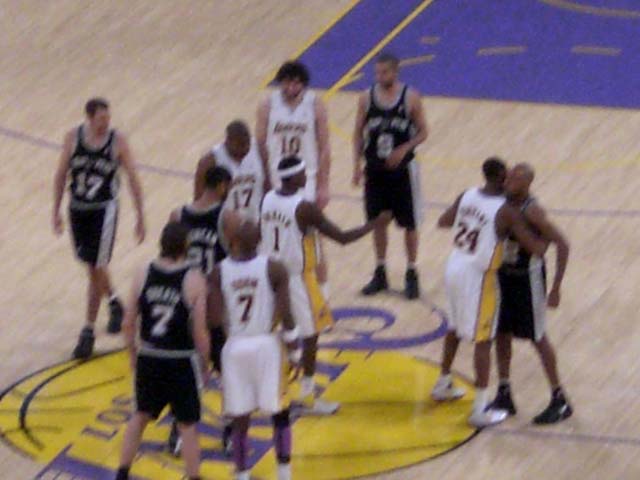 Got the e-mail on Monday (two weeks ago today). Nike was going to unveil Kobe’s latest shoe in L.A. on Saturday the 27th, and did I want to go? Hm. Let’s see. Weather’s in the teens in New York, in the 60s in L.A.. Oh, and the Spurs were gonna be in town on Sunday and we’d be watching from a suite.

Yes. I can get down with that.

So, a six-hour flight, a ten-minute chauferred Mercedes (Nike just does it right) ride to the hotel and a long night’s sleep later, here we were, roughly 20 members of the media assembled into a lounge at the Belamar Hotel in Manhattan Beach at 10:30 a.m. on a dreary L.A. day. No Kobe yet, just Nike PR head Rodney Knox and basketball production line manager Charles Williams, and a shrouded platform concealing what appeared to be a couple of shoes.

As usual, things opened with a video montage. Which actually didn’t work properly—it started at the end, and I don’t think we ever did see the whole thing. So Williams skipped straight to the PowerPoint presentation—another sneaker intro staple—after hailing Kobe as “the best of the best, the actual best in the NBA at this point.” Arguable, perhaps, but sure. Hey, it’s their show.

And their shoe. They explain a few things—the combination of science (the actual technical aspects of basketball shoe development) and obsession (Kobe’s well-documented attention to basketball details), along with the desired aspects of the shoe (Kobe asked for a shoe that was more flexible, had a less-layered upper, and was lighter, lower and better-cushioned than its predecessor) and how they delivered (a Free-inspired outsole, a Considered—through the use of stitching rather than glues—upper, 8mm and 18mm articulated Zoom Air, a carbon composite shank plate). It’s mentioned that the Zoom Kobe 1 wasn’t quite as sleek as the consumer—and, in fact, Kobe—wanted. The Kobe 2 (not to be confused with the adidas Kobe Two, which closely resembled a toaster) would be closer in form to the Huarache 2K4, which Kobe has cited as being his favorite Nike shoe.

They then revealed the acronym W.O.W., which stands for Weapons of War (not World of Wrestling or Wendy O. Williams), and Williams (Charles, again not Wendy—she’s dead) mentioned that they “wanted to give him an arsenal of products.” (This is the first official mention that the Zoom Kobe 2 will be more than one shoe—a fact that Kobe himself alluded to when I talked to him in Portland a few months back.)

There would, in fact, be three shoes (which is the number Kobe mentioned). There’s be the “basic” Zoom Kobe 2—his everyday game shoe—as well as a “Strength” shoe (tough, additional straps, welded/reinforced upper, fewer vents) and a “Lite” shoe (for use in the 4th quarter/playoffs, up to 2 ounces lighter than the regular Zoom Kobe 2). All would share the same midsole and outsole, and thus the same cushioning and base stability. As a concept, this is unprecendented. Even MJ only got one shoe at a time.

The unveiling would only cover the “regular” Zoom Kobe 2 and the Strength—the Lite was still in the process of being trimmed down. The sketch on the screen revealed a very basic shoe, with no Velcro straps and a huge logo on the heel. “We’re trying to have it the lightest shoe in the marketplace,” said Williams.

Mention was made of special makeups for sneakerheads (their words), limited editions and such. The first “regular” ZK2, in black/varsity maize, would release on 4/1. Releases of the other shoes would be staggered, with the Strength coming on 5/1, the white/white ZK2 on 6/1, and the Lite not appearing until 10/1 (although one would guess that Kobe himself will have a pair well before that). Prices would be $130 for the base ZK2, $140 for the Strength and $150 for the Lite. It’ll be interesting to see how well THREE simultaneous signature shoe releases sell, especially when they’re associated with Kobe Bryant, who remains somewhat of a polarizing figure.

Following the unveiling (rather than talk about it, you can check the pictures), we’re bussed over to Laker practice, where we sit in the gym for 20 minutes and watch Aaron McKie and Sasha Vujacic shoot threes and Brian Cook hit an alarming number of half-court shots before returning to the hotel for the second part of the presentation. (I’d talk more about practice, but it’s not like we saw Tex Winter diagramming the triangle or anything—I don’t think Phil Jackson even stood up the whole time we were there.)

Before it starts—we’re waiting on Kobe—the speakers pump out a steady flow of ‘80s rap and R&B (“OPP,” “Poison,” that one Young MC song). One has to wonder whether this was Kobe’s choice.

Then he’s hustled in, dipped in a black sweatsuit and a pair of pristine white Air Force 25 Supremes, wedding ring glittering. Gotta give it to Kobe, he’s got presence. As “next Jordans” (I know) go, you could do worse.

He speaks a lot on the shoe, and my fragmented notes reflect that I, well, don’t write that fast, “I always like something that’s sleek, that’s creative, that’s precise…I don’t like overdoing it…I wanted a lot of cushioning, but I wanted to be one with the floor, like the 2K4…I’m always pushing for the lightest possible shoe…when it comes to colors and materials, I tell the designers ‘have fun with it’…you just have to improvise, take your talent and let it flow.”

He also explains the Kobe logo—a three-pronged, well, something—as a sheath. “It’s where you store your emotions, that’s what it represents.” Right.

He talks about the Strength a bit as well, explaining that the inspiration for it came to him when he was watching a documentary on killer whales. “They attack together, in unison. Size, speed, power.” Looking at the shoe’s black and white color scheme, it makes sense.

He mentions that he (like Jordan before him) wears a fresh-out-the-box pair every game, sometimes only deciding on the specific colorway right before the game. “There’s something about taking [a fresh pair] out the boxm lacin’ ‘em up, smellin’ ‘em.” He laughs. “It’s the same feeling I had when I was a kid.”

He’s asked if other NBA players want to wear them, and, if so, what he thinks about it. “A lot of players wanna wear ‘em, which is fine by me,” he says. “’Take this 40 and we’ll talk,’” I think he’s joking about that part.

“The important thing for me is that the shoe works on the court,” he says. “I want it to be the top performance basketball shoe in the world.” I’m sure LeBron feels the same way about HIS shoe, of course. And the Air Jordan is allegedly ALWAYS the best performing basketball shoe. But I guess you have to think that way. “It’s like, an aggressive shape,” he says of the ZK2. “A go-get-‘em kind of shoe.”

They end the presentation with a contest of sorts—Williams brings out a pair of size 9 samples of one of Kobe’s game-model 2K4s, and offers them to anyone who can answer a two-part trivia question about Kobe. Who, apparently, will pick who gets to answer. The question is this: Kobe set an NBA record in the game last night. What was it, and what two players did he pass?

I know this, as I read the game story before coming downstairs. I raise my hand, and look around to see who else has their hand up. No one. Kobe—whom I’ve dealt with plenty of times before—points to me. He became the youngest player in NBA history to 18,000 points. The second part is a joke, really—he’s passed EVERYONE who’s ever scored 18k—but I name Jordan and Chamberlain, the two names from the story. And go home with yet another pair of shoes. And that’s a wrap for the presentation, as Kobe is hustled out as quickly as he was hustled in. I don’t even get a chance to say thanks.

The next day, we hit Staples to watch Lakers/Spurs from the comforts of a luxury box. Being preoccupied with the free food (Pasta station? Sure!) and drink, I don’t take notes. And seeing that it took me a week to get this all down, I don’t really have anything new to offer anyway. I mean, it’s hard to see stuff from the boxes anyway—when Kobe clocks Manu Ginobili across the face at the end of regulation and Ginobili collapses, my first thought is that something happened to his knee or ankle. (Note to self: next time bring binoculars. I did take this horrible zoom lens shot of Kobe hugging Bruce Bowen, though.)

But I do manage to call the last shot. With only a few ticks left on the clock in overtime and the Spurs inbounding, people offer up possible scenarios. Brian Facchini, who works in Nike PR but was once a Spurs PR guy, calls for a two-man game with Duncan and Ginobili. Someone else predicts the same, only with Duncan and Parker. And I flippantly say “watch, Finley’ll hit a three.”

And he does. From 25 feet. For the win. I was only kidding, of course, but take my props nevertheless. Heck, it’s not that often I’m right.