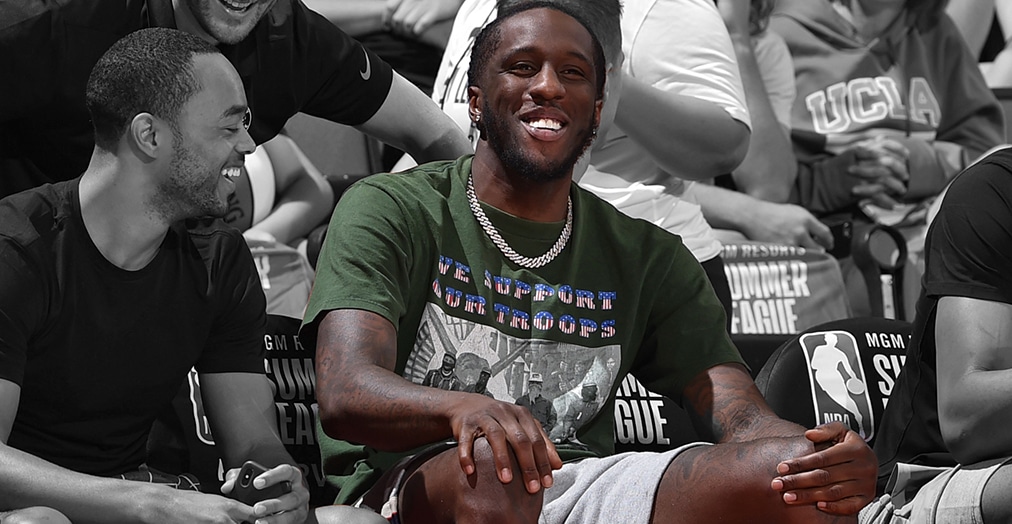 Taurean Prince was strategic with his joints. The former-Hawk, new-Net went next level when he wore Reebok Question Mids in Philadelphia as a tribute to Allen Iverson, and when he flexed with “Equality” LeBron 15s in Cleveland, a shout out to King James and his social activism. Those were declarations, evidence of a man thinking about how to show off a knowledge of and respect for sneakers that few would ever consider.

“It was something I was thinking about, being creative and doing things different than other guys,” Prince tells KICKS.

While most players don’t put that much thought into their footwear, Prince was ready for his moment as a sneaker free agent. His contract with adidas had expired right before the 2018-19 season began. By that time, he wasn’t a stranger to hooping in rare kicks. He wore T-Mac 5s, T-Mac 3s and even two different pairs of Kobe’s first adidas signatures when he was still with the Three Stripes.

“To be honest, I wasn’t really trying to compete with PJ [Tucker] or Trezz [Harrell]. Those guys, it’s cool,” Prince says. “But they’d rather spend a whole bunch of money doing that. It’s not even about that for me. I really don’t care about having the most expensive shoe on. It’s like, literally, whatever I feel like wearing that day or that game, it’s just what I’m gonna wear. I’m not basing it off whether somebody’s gonna post it. I know they’re gonna catch it, so it’s just gonna be what I like.”

He had a really good season, too. Though he had to overcome a left ankle injury that kept him out of over 20 games, he showed major improvement on offense. He ran pick-and-rolls better than the year before and drilled catch-and-shoot threes, hitting almost 40 percent from distance.

The Hawks traded him to the Nets in early June and he’s already thinking about his footwork for Brooklyn.

“Everybody knows my man is KD,” Prince says about his new teammate, Kevin Durant, who is now 12 signature sneakers in with Nike. “So I’m gonna cook up a lot of iDs with him. I’ll probably be wearing a lot of the things he would be wearing if he was playing.

“I’ll probably be more spontaneous with it this year. I’ll probably switch up between a lot of old Kobes and old KDs. Bron, he’ll get a taste a little bit this year, but you know how it is. When you’re teammates with the other best player in the world, you gotta tame that a little bit,” he adds with a laugh.

And speaking of Brons, the “Equality” 15s kind of fell into Prince’s lap at the perfect time.

“I was actually in Cleveland at the time,” the 25-year-old says. “My boy, he has a consignment store called Restock. So I walked in there and he actually wears my size. [The ‘Equality’ 15s] were just right there in the case. I asked how much they were. They were a good little price, enough to where I could get them at that moment. So I copped them right then and there and wore them that night.”

Prince says it’s become normal for him to hit up stores on the road.

“If we have five games on the road then I’ll bring, honestly, 10 to 20 pairs,” he says. “I may switch at halftime, I may not. Just depends on the vibe. I may go to a city with 12 pairs of shoes and then go to a shoe store and cop three pairs and end up wearing those three.”

With New York as his new home, Prince isn’t done flexing. Imagine what he’ll be able to find at all the sneaker stores in Gotham.

GRAB YOUR COPY OF KICKS 22