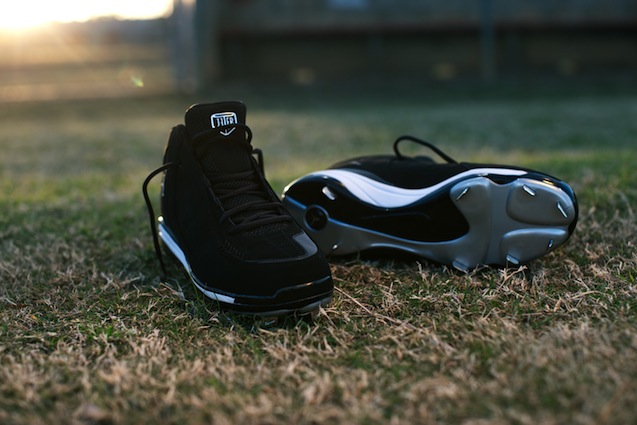 Derek Jeter, the most prolific hitter in the history of baseball’s most prolific franchise, the New York Yankees, is also a long-time endorser of Jordan Brand. Greatness loves company.

It probably seemed crazy. It just didn’t make sense putting the Jumpman logo on a baseball player. After all, the man depicted in JB’s iconic silhouette hit just .202 at Double-A in his full season away from the hardwood.

And yet, if there’s one name in baseball that resonates across sport—and popular culture—it’s Derek Jeter. In ’99, Jordan Brand entrusted the New York shortstop with the responsibility of putting a basketball company on the map in a game with no tomahawk dunks, ankle-breaking crossovers or buzzer-beating buckets.

At the time, Mike told The New York Times, “He’s versatile; you see him on the cover of GQ, then the next week he’s on the cover of Sports Illustrated. He’s focused; he works hard. He’s in a major market with a lot of pressure, but he handles the pressure. I’m proud of him; I’m glad we’re working together.”

More than a decade later, in a year when Jordan Brand released Jeter’s 10th signature shoe (second-most among JB athletes, behind only Jordan himself), the Yankee captain became the 28th player in baseball history to reach 3,000 hits, and the only player to do so in pinstripes. Consider it the fulfillment of Jeter’s promise to live up to the greatness synonymous with the Jordan name.

“All of the Jordan Brand athletes share a common goal, to be the best in our respective sports, so there is a natural respect and admiration for every athlete on the brand,” Jeter says. “When we see each other whether it’s on the field, at Nike WHQ, or supporting some of the Jordan Brand philanthropic work throughout the year, we understand that we are all very fortunate to be a part of an elite team and are all proud to wear the Jumpman logo.”

Since Jeter was handpicked as the first-ever Jordan Brand athlete, he’s seen Jimmy Rollins, Carl Crawford and current Yankees teammates CC Sabathia and Andruw Jones added to the baseball roster. And all Jeter’s done since donning his first signature cleat is earn 12 All-Star bids, win five World Series titles, five Gold Gloves and the World Series MVP in ‘00. His career .313 batting average has been a staple atop the Bronx Bombers’ lineup, as has his signature Jordan apparel.

The historic 3,000th hit came in the third inning of an early July, 2011 matchup with Tampa Bay, when Jeter turned on a 3-2 pitch and put it in the left field stands. As he rounded the bases with the Yankee faithful in a frenzy, DJ pounded each base with an exclusive pair of Jordan Brand cleats on his feet, forever linking a timeless moment in baseball lore with the most recognizable basketball name on the planet.

In celebration of No. 2’s milestone, Jordan Brand created a commemorative “DJ3K” collection. The Jeter-inspired line pays tribute to his past and present, and includes a specifically designed, limited edition colorway of the Jordan Jeter Cut cleat and trainer, as well as batting gloves and a series of DJ3K t-shirts.

The special 3K club kicks feature a colorway with a maroon upper, a nod to the beginnings of the future Hall of Famer’s career at Kalamazoo Central High School in Michigan. The sock liner is engraved with a replica of the first “contract” Derek ever signed—an agreement with his father before his first day of high school, promising to do chores and keep his grades up. On each tongue read the words, I AGREE, DEREK JETER.

At Kalamazoo, Jeter played hoops, too, which is where he says his admiration for Jordans began. “I always wore Jordans, usually the IIIs, IVs and Vs.”

So for a kid who grew up coveting Js like any other high schooler, getting a pat on the back from the man who made them famous was particularly memorable. “Michael definitely called and congratulated me on my milestone and said he was proud to have me as a member of the Jordan Brand,” says Jeter. “The Jordan Brand was very supportive and really made me  feel special.”

And Jeter knows special, having played every one of his 16 seasons with the New York Yankees. Back in ’99, he told The New York Times becoming a Jordan athlete was “an easy decision. Measure what he stands for on and off the court. I don’t know if there’s an athlete out there who wouldn’t want to be affiliated.”

These days, it wouldn’t be too difficult to imagine a young athlete—even a hoops star— saying pretty much the same about joining Jeter’s team.