MJ and the squad wore straight fire at the Games in Barcelona. 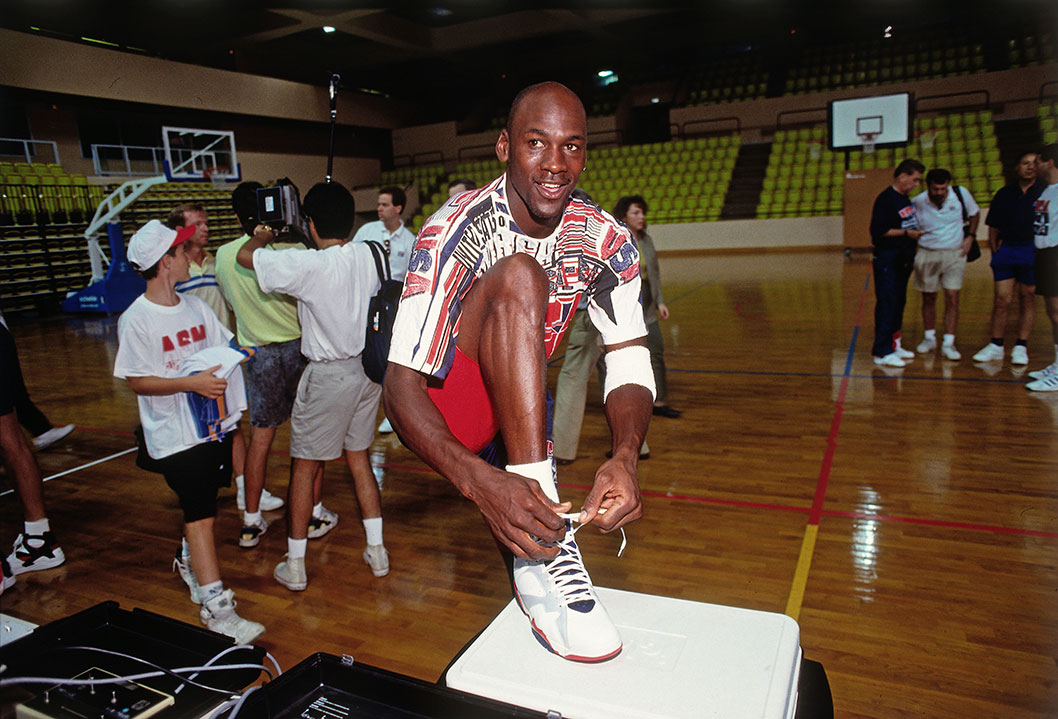 The 1992 United States Men’s National Basketball Team, better known as the Dream Team, defeated Croatia in the Olympic Gold Medal game 25 years ago today. The squad was so stacked that Charles Barkley and David Robinson came off the bench. The Dream Team’s average margin of victory was 43.8 points in their eight match-ups in Barcelona, Spain–they played four qualifying games in Portland before heading out of the country. They had 11 Hall of Famers demonstrating their dominance each time out and their influence is still felt to this day. From establishing the precedent of NBA players participating in the Summer Games to expanding basketball’s popularity globally, the USA’s 1992 squad left its mark.

Their kicks were also straight fire.

The most legendary were Michael Jordan’s “Olympic” Air Jordan VIIs, a USA-themed colorway with metallic silver highlights and gold accents. The back heel featured the diamond emblem associated with the Air Jordan VII, but with the number 9, Mike’s Olympic jersey number, instead of his famed 23.

With Jordan coming off back-to-back MVP and Finals MVP awards, Larry Bird and Magic Johnson were passing him the proverbial torch. Those guys were still as popular as ever, though—Magic was voted into the All-Star Game and made it onto the Summer squad despite retiring in 1991. Converse whipped up a new pair of red, white, and navy joints for Magic–the Converse Magic–and Larry–the Converse Bird–each with their number stitched into the ankle collar.

Converse had signed the two biggest stars of the 1980s, but more than half of the Dream Team repped Nike in Barcelona. The majority of every men’s and women’s Olympic team since has been endorsed by Nike, with the Nike Air Flight and Nike Air Force taking center stage. The Flight shoes were made with lighter material for guards and wing players, and the Forces were primarily worn by big men, designed to have more support and be less likely to give under extreme physical stress.

Charles Barkley, the leading scorer of the greatest team ever assembled, donned the Air Force 180s, which utilized Nike’s biggest visible air unit to date and a large midfoot velcro strap. David Robinson and John Stockton suited up in the Nike Air Ballistic Force. As opposed to the standard mostly-white Force design, the colorway was next-level, featuring saddle-shoe color blocking and gold accents. Its combination of the Force’s style with many of the Flight’s characteristics made it a good fit for both The Admiral and the NBA’s all-time assist leader.

Scottie Pippen and Chris Mullin, on the other hand, brought out the Air Flight Lite II, one of the sleekest kicks of the era. Christian Laettner joined them in wearing Flights, but unfortunately he didn’t get the memo that the rest of team was going with exclusively USA-colored footwear, as he sported a black and red Nike Air Flight Huarache.

Aside from the Jordans, the only other signature shoe at the Olympics was Patrick Ewing’s Eclipse High. It was unique, with an enormous tongue and a removable ankle strap that could be used in the front and the back, but it’s a classic that’s still a neck-breaker today. The silhouette, which sold out almost immediately when it first became available in 1992, got a limited release last summer.

As Ewing’s fellow starter in the frontcourt, Karl Malone’s weapon of choice was the comfortable LA Gear Catapult. The sneakers had a “Power Feedback System” that actually led Nike to sue the brand for copying their patented “Spring Moderator” technology. Last but not least, Clyde Drexler, fresh off a crushing Finals defeat to Michael and Scottie two months earlier, wore the Avia Arc just after just switching over from the KangaRoos brand (times have changed).

Peep the gallery up top to see all these ‘ways in action.