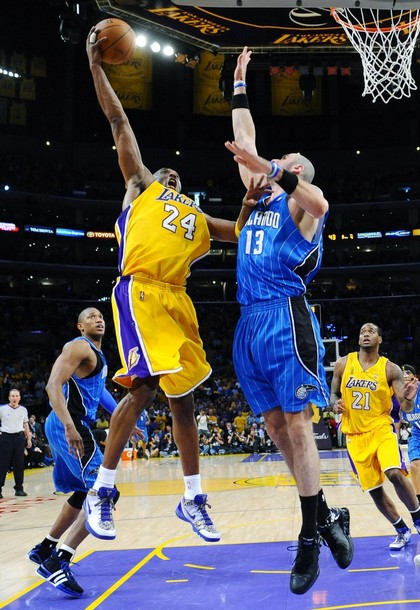 There’s nothing worse than going all out for someone — your boss, your coach … maybe your girlfriend? — and seeing that telling look that silently drops those two devastating words on you. Nice try, thanks for coming out, but that’s not good enough.

It is, however, kind of different when you’re the one asking the question. That’s where I found myself Thursday night, watching Kobe Bryant as he stepped onto the court to take part in the seventh NBA Finals of his career (damn).

The question actually came to mind before Game 1 had started. Pics of the shoes Kobe would be wearing made their way through the sneaker blogosphere earlier this week. And while I’m a fan of the Zoom Kobe V, the white/gold colorway that Kobe rocked Thursday night was a little disappointing. Especially when you compare it to what he wore in Game 1 of the Finals a year ago against Orlando.

If you put the two shoes and Kobe’s play in both games up against one another the winner is clear, in my mind, at least. Sure, a Lakers-Celtics Final is a better pairing than Orlando-L.A. was a year ago but from an aesthetics and numbers point of view, well, you know. Check it out.

Thursday night, Kobe went for 30, seven rebounds and six assists in a 102-89 win while wearing some pretty pedestrian-looking shoes, compared to what he’s worn all year.

Overall, I wouldn’t trade what’s in front of us for one game of the ’09 Finals. I am missing the kicks, though.