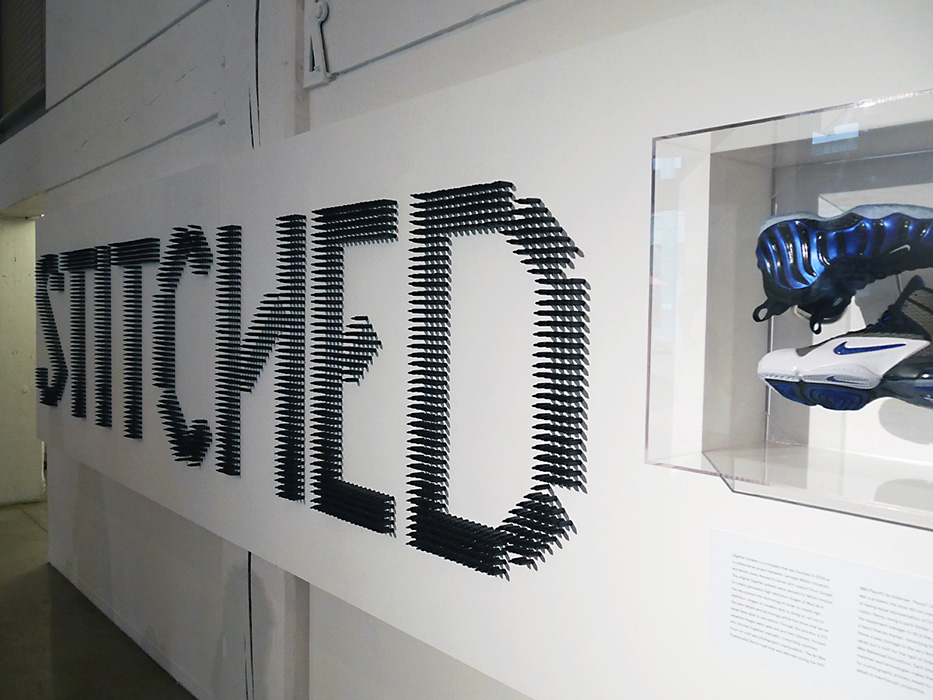 Over drinks and a hip-hop soundtrack, Wieden+Kennedy dropped some insights into the future of footwear photography with the opening of the STITCHED exhibit at their Portland headquarters last Friday. Using Nike’s “Sharpie” pack as the centerpiece and GigaPan photo technology as the backbone, W+K showed exactly how much sneaker photography has improved since the days of the one-megapixel camera phone—and it turns out it’s improved by 2,163 megapixels.

One side of the STITCHED installation was covered by a 34×16 foot GigaPan print of the newest Penny pack, while the exhibits back wall was full of iPads showcasing just how detailed the new technology could get. With a field of vision as detailed as GigiPan’s, the subject matters—so it only makes sense W+K used the Sharpie pack as their model. With one Nike Air Foamposite One Sharpie 2015, which features an upper that’s made to look like Penny Hardaway’s famous zebra-esque home made version, and one Zoom Penny 6, an all-new iteration of the Penny signature line, the pack’s details contrast nicely to show exactly what the new photo technology has to offer for sneakerheads.

GigaPan—a NASA technology that was formerly used to take panoramic high-definition images of Mars—creates near-microscopic and ultra-detailed versions of its subject matter. The process to make a GigaPan photo is a photographic marvel in its own right: 4,972 separate images are taken, stacked, focused and stitched together manually to create one single 2,163 megapixel GigaPan image. Each fully stitched together photo holds its clarity and definition even when zoomed all the way down to yarns on the shoes collar, giving sneaker lovers the most in-depth look at a pair of kicks possible.

The Air Foamposite was set to debut during the 1997 NBA playoffs with a space age exterior that would’ve been right at home in front of the NASA developed technology, but one thing went wrong: its vibrant blue upper didn’t meet the strict NBA footwear regulation of representing both team uniform colors equally. With the help of some quick thinking, the Orlando Magic team manager filled in the grooves of Penny’s royal blue Air Foamposite with a black Sharpie and avoided a potential footwear ban.

The Sharpie pack acts as a career retrospective for Penny not only with the contrasting stripes on the exterior that pay homage to the original blacked out version and celebratory graphics on the Air Foamposite sockliner, but also in the overall construction of the Zoom Penny 6—which combines elements of the first five Penny signature shoes.

In their own homage to Penny, W+K accented their opening night debut of STITCHED with a video display simultaneously running seventy highlights of the swingman stitched together on one screen—just like their 2,163 megapixel photo.

When Ira LaFontaine isn’t writing, you can find him selling clothes on Tabormade.com or doing absolutely nothing on Twitter and Instagram.