Hard In The Paint 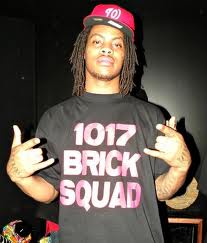 Waka Flocka Flame has become a household name in the world of Hip-hop. His debut smash hit “O Lets Do it” became a staple, not just in clubs and the radio but in arenas across the country. Known for his straight attack flow and gunshot ad libs, Waka has had his foot on the gas pedal driving up the charts and radio stations around the country since the release of his debut album “Flockvelli.” Follow-up hits like “No Hands” showed that Waka had crossover potential, while his PETA campaign “Ink not Mink” portrayed him as more than an influential figure in the hood, but one that could become a spokesmen for all causes.

I had the chance recently to speak to Waka about his music, his NBA-influenced mixtapes and what’s next for the crown prince of “Get Krunk music”

SLAM: You’ve made a huge impact on hip-hop in a small amount of time. What’s it like knowing that you became so important to the game in such a short period?

Waka Flocka Flame: I feel grateful. It’s humbling to know that I can give the streets good music.

SLAM: Some of your most popular mixtapes have had basketball centered themes. What inspired you to name your mixtapes after NBA players?

Waka: Basketball was what I did before music. I still have love and a passion for the game.

SLAM: For those who don’t know, you’re pretty tall. Did you ever play basketball back in the day for high school or anything like that?

Waka: Yes! I played basketball in school as well as a summer league around Atlanta

SLAM: Are you a basketball fan?

Waka: I am a huge basketball fan!

SLAM: Who are some of your favorite players? Do you have a favorite team?

Waka: My favorite team is the Oklahoma City Thunder and my favorite players are Kevin Durant and Lebron James.

SLAM: What NBA player you feel resembles you and why?

Waka: LeBron James. He started in the NBA young and went on to be an All-Star. That’s how I came into the rap game. Still, no titles like LeBron, but still very good at what I do.

SLAM: What are you working on right now?

Waka: I am about to drop the “Ferrari Boyz” album with Gucci Mane on August 9. I’m also working on building my label Brick Squad Monopoly into an empire.