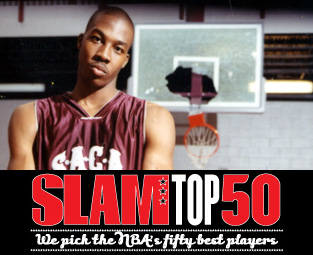 A funny thing happened on my way to writing the Dwight Howard post. An incredibly diverse group of people/superheroes/objects really wanted to talk about the young man-child and got in touch with me. The following is what transpired.

SLAM: I’d like to welcome you guys to first inaugural Bless Dwight Howard convention. Who would like to start with their impression of this big fella? Ah, Moses Malone.

Moses Malone: I’d like to thank folks over at basketballreference.com for inviting me. When you look at the numbers, it’s pretty staggering. In his first two years, Dwight Howard is putting up numbers comparable to me—as a power forward! That right there tells me about the speed that he boasts. He can wreak havoc without being a true 7 footer. He can handle himself in the lane with taller, more experienced guys. With his numbers and his hustle, he’s solidified my legacy. Regardless of what David Stern thinks, a polished big man can leave high school for the league and become an immediate, smashing success. Even KG admits he wasn’t even close to this polished when he got to the league. This kid is the youngest double-double the league has ever seen.

SLAM: Green dude, you look like you’ve got something to say.

The Incredible Hulk: What can I say? His strength, his force around the basket—it’s just so mind-boggling. (It’s at this point where the Hulk gets envious of Howard’s strength. He picks up the violent Swen Nater, another basketball reference invitee that was there to warn Howard about the pitfalls of not improving, and crushes him to death in the palm of his hand. After being handed a towel by Karl Malone, Hulk calms down and furrows his brow before continuing…)

Wow. Um, where was I? Uh… Well, he’s definitely on my fantasy team. Oh yeah, the other amazing thing about Howard is that he’s still so green. He’s not even old enough to buy himself a brew.

SLAM: So I guess you could say he’s about to have a “Banner” year?

Hulk: Do you want some, too? Are you seriously bringing that half-assed double entendre bullshit my way? Bitch, I’ll crush your corny ass in a Mickey Mouse minute.

Tony Battie: People still call me Batman? Thanks! You made my day! That said, I’d just like to thank Dwight for the fact that the two of us combined to average over 18 boards a game last year. He grabbed most of them and cleared my man out of the way for many of mine. Dude is a career saver.

Darko: Yeah, I got to experience a little bit of that, too.

Borat: Darkman free! Darkman freedom like? Abstract analysis touch you? You send shirt about Arena me for free and I neo-fascist Inter Milan catwalk like I’m too sexy? (Borat spontaneously bursts into a rendition of I’m too sexy for my lion as the greatest known collection of big men and superheroes stare blankly.) Wait we talking bout Dwight?–Dwight Howard? Child of a man?

Darko: Yeah, freedom is cool. I’m still getting used to it, but I appreciate the work that the guys put in over at FreeDarko. Again, I gotta at least partially thank Dwight for my bright future.

SLAM: Coach Hill. Anything to add to that?

Brian Hill: Like I said after he went for 28 and 26 against Philly in April: “Dwight was sensational…He’s continued to grow and grow and grow and has gotten better in every phase of the game. But to get 26 rebounds. That’s a monster effort for anybody and you don’t see that too often in today’s game.” My favorite thing about that effort was Dwight’s postgame perspective. Mind you, he posted those crazy numbers and we won. But he missed 9 free throws, so he was upset at himself. He said, “What would have been huge tonight is if I’d have hit more of my free throws…I would have kept some distance between us and them.”

SLAM: Wow. Impressive. I don’t really know how we can follow that up…Hey! Shawn! I didn’t even recognize you. You look great.

Shawn Kemp: Thanks. I’m working on a comeback.

Kemp: I gotta just say a few things. This kid has the potential not only to be a superstar force of nature in the paint, but he can also have the longevity that I lost to my wild side. He has a good head on his shoulders. He’s a god-fearing Christian. And if such a crisis ever arose—and it probably never will—I’m sure he’d be an alimony paying, God-fearing Christian.

Karl Malone: While we’re talking about the strength of his character, I’d like to add that he’s such a nice kid. He would never say anything about Kobe’s wife. Heck, Kobe would probably trade the farm for him.

Malone: That’s the point. Kobe would go out of his way to buy a farm and then he’d package it with Lamar Odom, Jordan Farmar and future draft picks. That’s how bright Howard’s future is.

SLAM: I think you’re underestimating DH. Would Kobe include a tractor in that deal?

Malone: He would include many tractors.

SLAM: Tractors with rims on them?

Malone: Sure. I mean, there are many different types of tractors. Actually, I think the tractor industry and the future of a good, young, strong tractor is the perfect metaphor for Howard’s career–

SLAM: That’s enough, Karl. We don’t have all day. Who’s next? We done? Oh, hey there little fella, didn’t even see you there. I thought for a second that we were finished, and then the light refracted off of you.

Piece-of-shattered-backboard-from-his-first-SLAM-photo-shoot: Ya’ll have no idea! Until you’re on the other side of the Dwight Howard experience, you have no idea what you’re up against, and you have no idea what the future holds for this kid. The only reason I’m still here is because Lang decided to save me. That’s how crazy it was. I lost my family and my livelihood to this dude.

POSBFHFSPS: I was built to withstand hundreds of pounds of pressure. And look at me now. The scariest part is that he’s just getting started. Oh, the humanity!