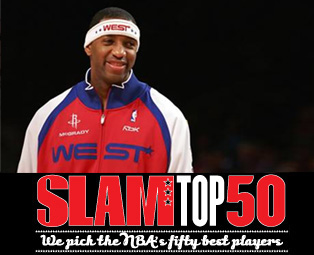 There have been flashes of brilliance from Tracy McGrady for almost a decade now. He entered the NBA in 1997, a scrawny, spindly high school kid who was placed in Toronto, a world away from his Southern roots. And even after he arrived in the T-Dot, he was placed on the end of the bench and told to listen and learn.

Thing is, he did. So much so that when he left for Orlando in the summer of 2000, the guy the players all call “Mac” immediately made his first All-Star team. One year later, he led the NBA in scoring. He was supposed to be teaming up with Grant Hill, but this was when Grant was going through his horrible ankle issues. Then things got testy, with T-Mac speaking out about the team’s management, and they sent him to Houston for Steve Francis. He finally went to the Playoffs in 2005, pushing the Mavs to the limit before getting blown out in Game Seven. It’s the furthest Tracy McGrady has ever been in the playoffs. He’s 27 years old, a six-time All-Star and five-time All-NBA selection and a tw-time scoring champ, but he’s never been out of the first round.

If he was completely healthy, we’d probably have him ranked higher. But he hasn’t been completely healthy for a while. In fact, for every great memory of Mac — like the time he scored 13 points in 35 seconds to stun the Spurs — it’s impossible to think about T-Mac these days without injuries coming to mind. In fact, when I was in L.A. this summer to interview all the guys in the new adidas “It Takes Five” ad, at one point I found myself sitting on a couch with Mac in the lounge of the photo studio. Tracy put his leg up on an ottoman, because it was there and that’s what ottomans are for, dammit.

Then Kevin Garnett burst in the room, his energy redlined as usual. He saw T-Mac’s leg elevated and he froze and asked Mac, “What’s wrong with your shi*t, yo?” T-Mac was fine, but the Big Ticket was just asking the logical question, considering T-Mac’s injury-riddled history.

“Like last year, man, I don’t know, it was a freak accident,” Mac said when I asked him about his health. “I was healthy going into the season. First game of the season I was healthy, and you know, I had the best preseason of my whole career! And then when I come to practice after the first game, I go around one of my guys who went up for a layup, try to avoid Yao, I came down wrong and right then it hit me. I was out for a while and I was never healthy. It just kept bothering me throughout the whole season. Then I had stress on me, some off the court shit, and that hindered it a lot too. But now I’m healthy.”

“Yeah, I feel like my normal self and sh*t. I can’t wait ’til October, because I had a bad year. My team had a bad year. It’s time for me to make some things happen, man, in the Playoffs. Other than just getting there and having a helluva first round.”