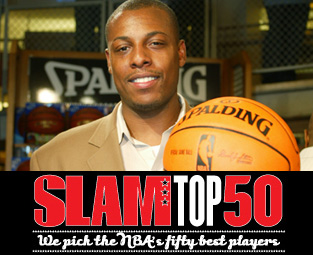 This is a tough call. Paul Pierce is coming off his best season, surrounded by a cast of mostly young, unproven players.  He never misses games, playing in 79 games or more every year since 2001. He’s been on some bad teams, became the franchise player on a young upcoming team, played great in the playoffs, and with that team rebuilding again, he’s still there. Without Pierce, who knows how bad the Celtics would be. With him, they almost made the playoffs.

Then there’s that word “almost.” Paul’s numbers were 26.8/6.7/4.7. A monster year, highlighted by a month where it felt like he scored 30 every night and willed the eam to victory. The Celtics record was 33-49. In fact, the Celtics have been going backwards since their Eastern Conference Finals trip in 2002 when Pierce famously sparked one of the greatest single game playoff comebacks ever against the Nets.

He’s 29 now, and after last year, his value is as high as it will ever be. There’s no denying he’s a great player, but it’s hard to put that into context because it’s hard to tell what the Celtics are.