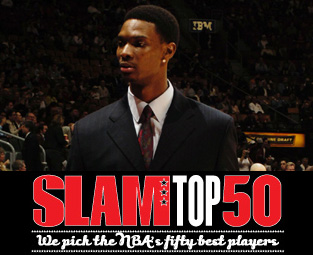 I may or may not have just spent the last couple days on the road working on a Chris Bosh story, and that may or may not been enough for me to confirm what I’d heard about him from colleagues, which is that he’s a great person to interview because he gives thoughtful answers and expresses his own level of curiosity about others. That stuff doesn’t matter, though, because this list ain’t a popularity contest—it’s about what dudes bring to the floor. And if you’ve ever seen Chris Bosh play (I think “if” is a fair qualifier when discussing the NBA’s oft-ignored Canadian franchise, though it won’t be for long with this guy), you know he brings plenty.

There’s the guard-like quickness in a 6-10 body, the long wingspan and the soft shooting touch. So far it’s been enough for a statistical progression straight out of an NBA scout’s wet dream: 11.5 points and 7.4 rebounds per game in his first year, 16.8/8.9 in his second, and 22.5/9.2 last year. Clearly, CB had potential, and just as clearly, he’s realized it. One more year of improvement and we’re talking about a 25 and 11 per night, all-NBA first team player. Don’t sleep.