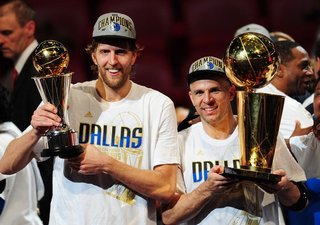 Throughout the NBA Finals, the prevailing storyline has been that of the Miami Heat, its superstars, and their inability to come through when the chips were down.

The real story, the one that no one seemed to pay any attention to until late last night, is that the Dallas Mavericks are the best team in all of basketball.

The Mavs walked into Miami’s house, up 3-2, withstood the Heat’s initial surge (led by LeBron James), survived Finals MVP Dirk Nowitzki’s early shooting slump, and rode the hot hand of its veterans all the way to a title.

In the end, unless you were a Heat fan, one couldn’t help but be happy for the long journey these guys went through to finally arrive at this triumphant moment.

The Star-Telegram has the quotes:

“Man, this is what I obviously played for the last couple of years,” said Nowitzki, who scored 21 points on 9-of-27 shooting. “I think when you come in this league you want to establish yourself. All these All‑Star Games and all those things are nice, in scoring. But when you get to a certain age you’ve basically seen it all, and all you play for is for that ring.”

“It wasn’t about me carrying the team – I was doing my job,” [Jason] Terry said. “My job is to come in and provide a spark, make plays, make shots. I did my job and I knew if Dirk continued to get the shots he was getting, those were good shots. He wasn’t forcing anything.”

“I’m so happy for him, I’m so happy for Dirk,” Carlisle said. “I’m so happy for the Mavericks’ organization, which is such a class organization, as are the Miami Heat. I don’t think there’s any doubt after this series that Dirk has certainly earned the clout of being one of the all‑time great players. His versatility, how he’s done it in the clutch. He goes 1‑for‑12 in the first half, and then in the second half he was just absolute money.”

“Obviously (the ’06 Finals) was one of my most disappointing losses in my career, to lose the Final series after being up 2‑0,” Nowitzki said. “It took so long just to get here. Just this feeling to be on the best team of the world is just indescribable.”

As the labor situation gets sorted out, there’s no telling when we’ll see NBA basketball again. But even that unfortunate reality can’t take the shine off of what was an incredible NBA season.

Congratulations to the Dallas Mavericks. Here’s to hoping they’ll have a chance to defend their title sooner rather than later.