Things I Wrote Down While Watching “Committed: The Christies” 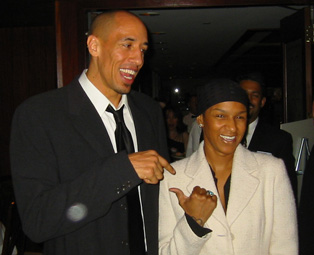 Hey, someone had to watch it, right? Here we go…

1. BETJ is actually BET Jazz. Not sure how this show fits into that premise, but whatever.

2. Percy Allen from the Seattle Times pops up and says Jackie Christie is “the epitome of the ride or die-type of chick.”

3. DC introduces himself as “Douglas Christie” and has about as much excitement as an avocado.

5. Jackie’s Mom says “they are a team that cannot be destroyed.”

6. OK, so maybe she’s not completely stable, this Jackie Christie. Three minutes into the show, Jackie and Doug are walking through a CD store when a young girl comes up to see if they need any help. “He knows what he wants,” Jackie snaps, and then adds, “Get away from me.”

7. I guess they couldn’t hire an editor, because so far it’s just a bunch of clips thrown together with no story at all. In half the clips Jackie Christie has really short hair, and in the other half she has really long hair. Doug’s shaved head is genius if only for continuity’s sake.

8. First commercial break. If you thought you knew everything about the Christies’ relationship…well, you probably do.

9. To quote Jackie Christie, their marriage has been “ten fantastic, tulumptuous years.” Probably more fantastic than “tulumptuous,” whatever that means.

10. When Jackie and their daughter are practicing dance moves in their living room, the daughter slips and falls, and out of nowhere a cartoon sound effect of someone falling plays, like on America’s Funniest Home Videos. Awesome. More ridiculous sound effects, please.

11. Jackie and Doug go through Doug’s fan mail. She reads it aloud really fast while he signs the cards the fans sent along with the letters. This takes several minutes and feels very self-serving.

12. Percy Allen returns and talks about Doug Christie’s fistfight with Rick Fox, and it becomes apparent that this show doesn’t have the rights to use actual NBA footage. Couldn’t Bob Johnson make that happen? Instead Doug describes the incident while a series of still pictures flash and zoom across the screen.

13. Oh man. And for some reason a crude cartoon (think South Park) pops up of Jackie Christie hanging on Shaq’s back (in a Lakers uniform) hitting him with her purse. Cartoon sound effects of a punching sound play.

14. A fake issue of the Sacramento Bee rolls off the presses with the entire front page a picture of Doug Christie’s face. The headline is “DOUG CHRISTIE TRADED!!!” and below it says “KING’S GUARD DEVASTATED BY MID-SEASON MOVE.” I know this is a fake Sacramento Bee because not only did this story not rate this kind of coverage, but I’m also pretty sure the Bee has a few copy editors to check punctuation.

15. The Christies say they were shocked to be traded, so much so that they cried. Doug is particulary angry because he gave a lot to the franchise. Jackie says she had to be strong for Doug.

16. Video shows them putting their Sacramento house on the market, turning out the lights and walking out the door.

17. Welcome to Orlando! We now watch as the Christies unpack boxes in their new Orlando home. It looks exactly like their Sacramento home. Doug picks up and moves some sort of tabletop video game, and drops two s-bombs as he carries it because it’s heavy.

18. A crew comes in to install a safety net over the pool. Doug goes out and spends a few minutes listening to the workers explain how to loosen the net. Amazing TV. if this show were any more banal it would be on ESPN2.

19. Uh-oh, Jackie is ready to get this new house in order but “we’re having issues with Circuit City again.” She is not having this. Next we see her on the phone, trying to get the installers out to put in the TV. And then she picks up her cell and starts calling Doug, and a counter appears on the bottom of the screen and totals — get this — 25 calls to Doug. 25 calls! Then a clock pops up on the screen that reads “11:01 a.m.” If my wife called me 25 times before 11:00 a.m., I’d throw my phone under a bus, if not myself.

20. Jackie gets the manager of Circuit City on the phone and threatens to have them come pick up all the equipment because they can’t show up in time to fix it. This goes on until 1:06 p.m. — repeated shots of Jackie on the phone, demanding people show up to install their TV. This might be the most boring TV show ever made. She finally says she’s going to do something else to keep busy so she doesn’t get too angry. I find myself hoping she occupies her time by calling Doug again.

22. Ahhh! Back from a commercial and it’s still Jackie Christie on the phone calling Circuit City. At this point I’m ready to go to their house and install this damn TV just to shut her up.

23. 3:08 p.m., we are told, and she’s still at it. She tells someone at Circuit City she’s not trying to hassle them (right), but they have big boxes in the middle of their living room floor and they have little kids, although their youngest kid seems to be 7 or 8 years old and has only been seen once the entire show. I’m hoping the guy at Circuit City just hangs up on her.

24. Circuit City shows up at 6:08 p.m. Jackie says, “Finally, my god…” And then…she calls Doug and leaves him a message to let him know the installers are there.

25. While the guys work on the TV, Jackie sits on a couch and watches them work.

26. When they finally get it on the wall, Jackie calls Doug to let him know.

28. Next week on Committed, we see scenes of Jackie, angry about a woman working at an airline counter. I am so not kidding, either.

29. Gotta be the first show ever made about someone trying to get a plasma TV installed in their house. Unbelievable…did they think this was interesting? Doug wasn’t even on the show that much. Well, at least I TIVO’d it and was able to skip through the commercials.