Zach Randolph Wants to Retire as a Memphis Grizzly 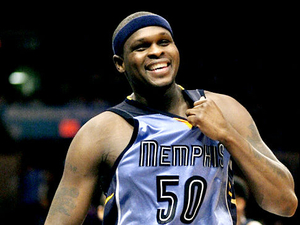 For now, Zach Randolph remains undecided about whether or not to opt out of his deal in July. The Grizzlies star forward can play out next season and earn $16.5 million, or elect to join a loaded 2014 free agent class.

Whatever the case, Randolph says Memphis is home, and wants to keep it that way:

“I’d like to be here,” Randolph told ESPN.com. “I’d like to retire here. You never know. If I’ve got to make some sacrifices to be here, I would. I still can play, I can still help a team out. I want to win a championship. I’ve made all the money in the world. I just want to win.

“I don’t know yet [about opting in or opting out], but Memphis is my home. If they trade me tomorrow, I’m here. I just bought a new house. My daughters go to school [in Memphis]. That’s my home.”

Ever since the Grizzlies dealt away Rudy Gay last season, there have been trade rumors involving Z-Bo. Nevertheless, he talks of potentially sacrificing and accepting less money to stay in the same uniform.

Entering a crucial season, Zach Randolph, 32, is in great shape — he lost about 15 pounds over the summer — and headed towards an uncertain future.