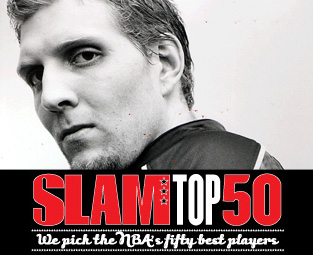 When Dirk Nowitzki first came into the league, he couldn’t stop
swearing. In practice after missed shots, in the locker room,
sometimes even in interviews. The guy had a second career as a sailor.

You know, if that whole “being the best International player in the
history of basketball” thing didn’t pan out.

But anyone and everyone who walked by this oversized kid trying to
fit into this new language, this new culture, this new style of play,
even, was going to make sure he panned out. Because they saw
something special in him.

They saw a kid who was a step quicker than anyone his size. They saw
a kid who was always one move ahead of his opponents, and one day
ahead in progress than any other of the NBA’s “pet projects.” And
they knew, ultimately, he just had the misfortune of undergoing his
entire maturation process in the NBA.

“We’re working on that.”

His ever-improving post game? Dirk has almost fully transformed
himself into a two-dimensional offensive player. He will forever be
an oversized two-guard first, but with summers of practice in
Germany, perfecting a baby hook and a few new post moves, Nowitzki is
just as effective from the low-block.

His defense and toughness? A couple of clutch blocks in last year’s
Western Conference Finals and a few fiery shoves underneath the
basket later and the frontcourt of Nowitzki and DeSagana Diop and the
Mavericks shed their “soft white boys” image that they had picked up
in Dirk’s early years.

As for rebounding? Dirk has averaged more than nine rebounds per in
five of his last six seasons. Oh, and he happened to lead the league
in rebounding in the playoffs as his team marched to the NBA Finals
last year.

And if there’s any doubt that he’ll one day be at the top of SLAM’s
Top 50 Players list, or that he’ll bring his team back to NBA Finals,
or that can find a way to win it some time, then just remember this:
They’re working on that. Dammit.