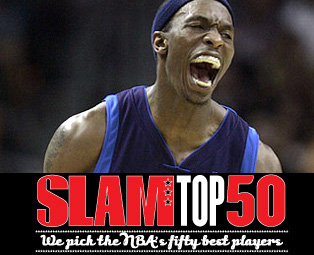 What makes Josh Howard deserving of attention? As much as anything, the lack of same he receives from an ignorant and sloppy media that should be ashamed of itself. Oh, and J-Ho’s level of humility, which flies in the face of his escalating excellence and causes him to rank among the few NBA players actually capable of blushing.

CBSportsline.com recently ranked the top 20 small forwards in the NBA. As an addendum to that, writer Tony Mejia included an “also thought about” group of 3’s. In an oversight later corrected by the writer, not only was Josh’s name absent from the 20 — he didn’t even make the additional 23.

The best NBA small forwards…and you didn’t “also thought about” the guy who last postseason was asked to guard everybody from 7-footer Pau Gasol to MVP point guard Steve Nash to Dwyane Wade? Who was guarded by All-Defensive NBA studs Tim Duncan and Bruce Bowen and Shawn Marion and yet, on Dallas’ march to a Western Conference title, averaged 17.4 points and 7.2 rebounds?

RealGM recently took a turn at the same game. They did a top 10. No, Josh Howard wasn’t on it. They tossed out three more “Just Missed The Cut” names. No Josh yet. They spitballed a few more “Names For The Future.” Marvin Williams was on that list. So was Adam Morrison.

“They always said I wouldn’t make it at this level,” says Josh. “Then they said I wouldn’t be anything here but a third wheel…That’s one of the motivations that got me to this point. Being a guy that’s been looked down on all his life, guys trying to write me off in college and high school. It’s past that now. I’ve gotten to this point and I think everybody should know.”

But everybody doesn’t know.

Happily, Mavs fans get it.

I asked DallasBasketball.com readers to pitch in with their thoughts. Writes “TripleCrown”:
“He has a knack for not letting anything keep him from getting what he wants; whether it’s a rebound, or a starting spot on one of the best teams in the league when he was supposed end up on the far end of the bench. When he was told he wouldn’t be able to perform athletically because of leg problems at birth, he proved them wrong. Whatever you need from this guy, he’ll give it to you…He’s not a guy that’s flashy, he’s just a guy that gives his all, and is willing to do whatever it takes for his team to win. Finding a player that’s willing to do all of the little things is a hard task in today’s glamour NBA. Finding a player that is willing to do all the little things, and can do all the big things as well? That’s a rare gem.”

Writes “Answer”:
Who is Josh Howard?…Rebounds, assists, blocks, steals, teamwork, community service, leadership and points…When the world championships called, Josh was already at work — building bridges to success for children at risk in his old neighborhood. Josh serves his team and his community with humility and with all his heart.”

Writes “Fro”:
Josh has…
1) The offensive game of James Worthy.
2) The heart and hustle of Eddie Najera and Ronny Brown (Phoenix Suns ’70s).
3) The unselfishness of Steve Nash.
4) The defense and rebounding of a young, un-tattooed Dennis Rodman.
5) The dependability of the U.S. Mail.

All good stuff from the people who pay the bills (except for the “U.S. Mail” reference, which sorta dates my man “Fro.”)

Howard himself doesn’t say much to distinguish himself from the crowd. He wears a headband, doesn’t tie his shorts tight enough and has a crummy nickname. He’s been confused with ex-teammate Marquis Daniels, with fellow NBA star Dwight Howard, and with every young guy in the league named “Josh.” But always, there is the everpresent smile, up until recently featuring braces. Always there is the fire that coach Avery Johnson has helped Howard funnel in the right direction. And always is the sense that J-Ho only speaks when he has something of importance to say.

For instance: Why did he stay all four years in school at Wake Forest?

“There aren’t too many educated black men out there,” Howard says. “That’s important to me.”

What does he think about having been the 29th player taken in the 2003 Draft that also featured LeBron James, Carmelo Anthony and Wade?

“Yeah, that was a special draft, I guess,” says J-Ho, trying to cooperate with the questioner before turning more frank. “A lot of those guys have become leaders of their teams. (But) a lot of those guys were never seen again.”

What does he think about his elevation from a kid who in his first Mavs season was a “find,” a mostly defensive prospect who averaged 8.6 points per, to his second year when he was at 12.6 per, to last regular season when he reached 15.6 per and got an invitation (declined by Howard because of his commitment to kids’ camps back home) to try out for the U.S. national team? Does he look forward to someday being an All-Star?

“I can always just go and enjoy the festivities,” he laughs.

And then Josh Howard blushes.