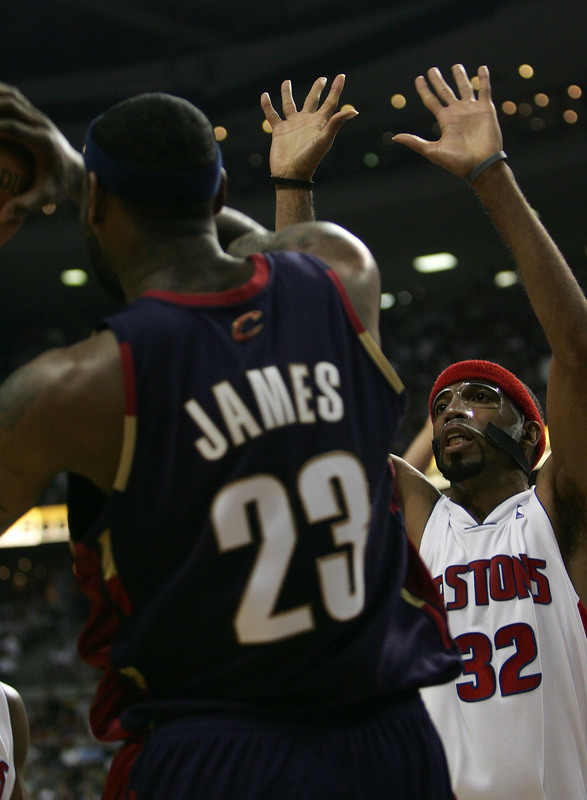 Well, okay then… as far as the game recap goes, have fun with this one Jake. I’ll be at the bottom of the pool with A.J. Soprano if you need me. Lots of walking the ball up the floor. These guys can milk a shot clock with the best of them.

There was some drama as always. Perhaps yet another controversy. Did Varaejo get fouled by Sheed or did he flop? Did LeBron make the right choice and was he fouled? What was up with that Pavlovic play? Did Larry Hughes get such a good deal on plane tickets for his summer vacation that he needs this to be a sweep? Do the Pistons have even the slightest concern in the back of their minds that they could lose this series? Do they even care about the first half of games? I’m sure it will all be discussed by Jacob.

As far as the ending of game one went, don’t waste any more of your time. Should LeBron have passed? Dunked? Laid it in? Who cares, he was lucky to even be playing.

You know what… the final score of game 2 was 79-76. This isn’t supposed to still be happening. The most amazing development of these playoffs so far in my opinion, has been the lack of calls received by Mr. LeBron James against the Pistons. It’s even more shocking than the Golden State upset. Isn’t the NBA supposed to be doing every little thing possible to get its biggest marquee name on the big stage? Sending a superstar to the free throw line not only helps his team win the game, but it pads his stats, and most importantly gives him lots of TV face time so the world can get to know him as a celebrity. The NBA is really going out of its way to prove that the megastar is not God. It’s weird. Up is down, hot is cold.

T.G.I.Fri-day!!!! This long weekend is much needed. The weather is approaching the 90s and that can make you a little bit crazy. Over the weekend, one game in each series will be played. That is all. Double sweep? Change of venue, change of luck?