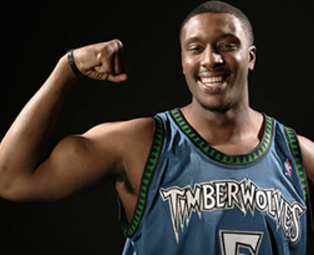 One of my favorite things about the beginning of each season is the evolution of rotations. Teams make surprise moves, guys who weren’t even expected to make the team become key performers, and against all odds some guys even become starters.

1) CJ Miles
THE SKINNY: Two years ago, Miles went pro out of high school and fell to the second round. The 6-6 guard played in 23 games for the Jazz last year but also spent a chunk of time in the D-League. This year, the 19-year-old was in the Jazz lineup on opening night. He’s started every game since.
THE QUOTE: “[CJ has] been [providing] a lot of our energy at the start. He gets us going. He’s getting himself shots and making them.” — Deron Williams

2) Cedric Bozeman
THE SKINNY: A few years ago, Bozeman was a high-profile recruit who signed with UCLA and was expected to help return them to prominence. A 6-6 point guard, Bozeman suffered an injury-plagued career and then as a senior was a role player on UCLA’s team that lost in the National Championship game. Bozeman went undrafted, and now is a key contributor for the Hawks, coming off the bench to do a little bit of everything.
THE QUOTE: “The fact [Bozeman] can defend three positions makes him a little unique and intriguing. And he can run your offense. He’s heady, and he’s not scared to make mistakes.” — Mike Woodson.

3) Jason Maxiell
THE SKINNY: At 6-7, Jason Maxiell was through to be a ‘tweener when he left Cincinatti for the NBA. The Pistons drafted him at the end of the first round in 2005, then let him marinate on the bench last season. He lost weight this summer, and played well in the preseason, earning a permanent spot in the Pistons post rotation.
THE QUOTE: “He makes plays that help you win games, whether it be rebounding or blocking a shot or effort plays. He brings a certain energy to the front line that we really, really like.” — Joe Dumars

4) Francisco Elson
THE SKINNY: Before this summer, Elson was probably best known for calling Kevin Garnett “gay” during the 2004 Playoffs. And with Denver getting close to the salary cap this summer, the Spurs stole him away and expect him to team with the silver-toothed Fabricio Oberto and fit in next to Tim Duncan and plug the hole left by Rasho Nesterovic’s departure.
THE QUOTE: Heck, Steve Kerr loves him.

5) Mo Evans
THE SKINNY: The Lakers traded a second-round pick for the former Pistons reserve to back up Kobe Bryant, but Evans has played a big role early this season, including putting 17 on the Suns on opening night and providing the hustle that has defined the Lakers this season.
THE QUOTE: “[Maurice] Evans is a sparkplug and does things defensively.” — Phil Jackson.

6) Craig Smith
THE SKINNY: OK, so Sam picked the T-Wolves as having the worst front office in the NBA. But their second round pick Craig Smith is making them look like they knew what was happening. At 6-7, Smith was considered undersized coming out of Boston College, even though he made first-team all ACC and averaged 17 and 9 as a senior. He’s earned a spot in the Wolves’ rotation and provides some much-needed heft alongside KG.
THE QUOTE: “That was the major concern coming in: Could he go against length in the league, 6-11 power forwards. He’s proved he can. That’s been a pleasant surprise.” — Dwane Casey.

7) Ime Udoka
THE SKINNY: Sometimes it just takes some time for guys to figure it all out. The son of a Nigerian immigrant, Udoka was born in Portland and bounced around the hoops underground for the last eight years, including two quick stops (a total of 12 games) in the NBA and a part-time job at FedEx. This year, he got an invite to training camp with his hometown Blazers. During camp, his father unexpectedly passed away. Udoka kept his head down and not only made the Blazers, he cracked the starting lineup and the 29-year-old has started every game this season.
THE QUOTE: “He has a lot of our people excited, because he knows how to play. He knows where to be, and that’s what we need because right now our young guys are still trying to figure out how to play the game.” — Nate McMillan.

8) Yakhouba Diawara
THE SKINNY: He verbally agreed to a minimum deal with Denver, then stuck to his word and turned down a two-year deal from the Mavs. The 6-7 swingman has averaged 18 minutes in the Nuggets first three games, primarily as their perimeter defensive specialist.
THE QUOTE: “He’s playing unbelievable. Guys are very impressed. I heard about him in the summertime, but it’s different to do it with NBA guys as opposed to summer league guys.” — Earl Boykins.