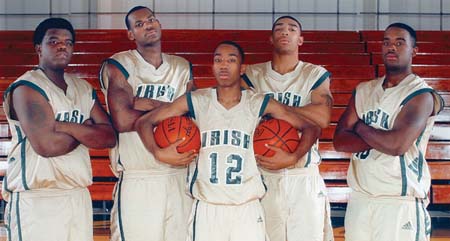 Despite the Hummer, throwback jerseys, and the SLAM and Sports Illustrated covers stories, none of us really got to know LeBron James very well early on.

He was polished and media-savvy from the moment he hit the spotlight, and never really “let us in.” In the documentary film, More Than A Game, the camera follows the maturation of LeBron and his St. Vincent-St. Mary’s teammates Willie McGee, Sian Cotton, Romeo Travis and Dru Joyce III.

The documentary is the story of five young men’s intertwining lives. We finally meet the personal side of a teenage LeBron James which was normally reserved for close friends and family.

Yet, LeBron is not the star of the film. Let me repeat: this film is not all about LeBron.

Equal time is spent getting to know LeBron’s closest friends Willie, Sian, Romeo and Dru, and Coach Dru Joyce Sr. We follow them throughout – beginning with their improbable run to the 1999 AAU National Championship all the way to their final game together in the 2003 USA Today National Championship.

More Than A Game is the first film from director Kristopher Belman. Like the principle

characters in the film, Belman hails from Akron, Ohio, and studied at Loyola Marymount University’s School of Film and Television. The documentary began as Belman’s senior film project, a 13-minute documentary short (a project Belman says he did not get an “A” for) that slowly became the basis for this full-length documentary feature.

The film builds up to the 2003 USA Today National Championship Game, the last game the five would play together in high school. However, far greater a challenge was their game against Canton McKinley, when the Ohio High School Athletic Association stripped LeBron of his eligibility for accepting two throwback jerseys.

Belman could easily have glazed over the controversy, but the director chose to tackle it head-on. He depicted a young high school phenom who was capable of handling the criticism.

More central to the film were his teammates showing themselves capable of winning an extremely important game without him. With their shot at a national championship hanging in the balance, STVM narrowly escaped with a one-point victory.

This would prove to be the underlying message of the film: LeBron James is just one man, and he alone does not win basketball games. In a sense, it validated the movie’s arc, which included focusing on four lesser players and one coach instead of telling the story of superstar-in-the-making LeBron James.

The film was extremely well received, earning a standing ovation that lasted several minutes. The credits rolled to the tune of Lil’ Wayne’s “Let the Beat Build” (by the way, the music was all mainstream – at one point on the bus with the guys, LeBron sings every word of 50 Cent’s “In Da Club”). Afterward, the film’s stars gathered onstage for a few words. Romeo and Dru Joyce III came from Germany, where they play professionally; Willie and Coach Joyce flew-in from Akron; and, of course, LeBron reminded everyone he came by way of Beijing. Sian couldn’t attend because he had a football game.

One of the festival bigwigs stood onstage, directing questions after the screening. LeBron played it cool, thanked everyone for attending, told a few jokes, and said nice things about Coach Joyce Sr. He took too much time though, because the rest had to speak quickly, and the audience Q&A was completely abandoned.

Willie spoke very smoothly onstage, and laughed-off the festival bigwig’s bad joke about “some white guy” following these guys around with a camera throughout high school. Romeo got a bit choked up. Dru Joyce III said he felt chills because the film forced him to revisit his entire high school basketball career – the shots, the pressure, the glory, and the pain.

Belman could have taken quick money and sold the footage years ago, but he had a vision, and the result of that vision is a very good documentary. For obvious reasons, it will be compared to Hoop Dreams, but doing so is a disservice to both films. They both about basketball, but hopefully that doesn’t lead to critics to make direct comparisons.

I can’t imagine this film getting a wide theatrical release, but only because the subject matter is, well, a little too “niche.” Sure, LeBron James is one of the most marketable players in the world, and yes, basketball is big around the globe. That said, documentaries have to be extremely compelling; they have to tell a story that rivals their fictional counterparts.

You’ll probably be able to catch it on DVD in about a year, so check it out then.

Chris Clarke spent two years blogging at End of the Bench on the Most Valuable Network, spent last season occasionally contributing to Hoops Addict, and now mostly writes nonsense on his personal blog, www.clarkeblog.com. He lives in Toronto.