A good night for us non-Pacers 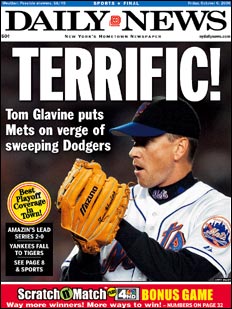 Feeling good today. Really GOOD! Mets up 2-0 in their playoff series, Tommy Glavine doing his thing, the ballpark going crazy. My brother was supposed to go to the game with me, but his wife wasn’t having a night of solo babysitting. So whipped. Instead I went with a friend, got stuck sitting next to a 450 pounder, about 3000 feet above the field.

I don’t feel that good physically because of some alcohol and food related issues from the game, but after being hit with that doomsday doubleshot of losing starting pitchers right before the playoffs, things are looking up.

Better for me than say, Stephen “Whoo!” Jackson, as Lang posted earlier.

The Moonball blog has the link to a certain John Tesh mp3 that you should be familiar with.

But you know what the NBA really needs? More alternate jerseys.

And deadspin, pointing the way to a Raptors blog working in concert with ex-coach Butch Carter. Can’t wait for his post about Marcus Camby.

The craziest development of the day yesterday, at least in my little world (really does not compare to the Pacers situation on any level), was that one of my closest friends was at the Yankees game and caught Johnny Damon’s three run homer. What did he do with the ball? Gave it to his boss. This is kind of like the time A-Rod tried to assassinate me and Lang stuck his hand out to take one for the team.

This friend of mine that caught the ball… I have been working on a book about him for a few years. It’s nothing too fancy, really just a collection of his one-liners and emails. I’m just compiling them. Here is his emailed telling of the story, heavily edited for content. One note of caution: this guy is kind of grimy. I figure on a Friday, this is a nice entertaining little short story to read.

My hot boss is getting married next weekend. Her fiance was supposed to go with her to the game but bailed today. So I of course slid myself in. We had upper deck, front row right field, near the pole. Damon’s ball landed near us and rolled to my feet. I picked it up and immediately gave it to my boss. Without hesitation. Big raise coming! She was shocked, and her loser fiance is pissed.

Too bad the Yanks lost. Arod is a f– and should be benched.

Not worried about the Yanks, though Detroit will be loud tonight. The Stadium was not loud at all yesterrday due to it being a makeup game. The only time people got up was when Damon hit one out to me in right field. I didn’t stand up and show the crowd. Mainly cause I was playing hookey with my boss so I’m not sure if I was on Sportscenter. I was the only guy wearing work clothes with the animals up there.

My boss just emailed me a thank you. She’s getting married next week and said Damon’s ball was the “best wedding present ever”. Now I begin dismantling her marriage and moving in. She has a boomin’ ass.

There’s your first book excerpt. You have to pay to read the rest.