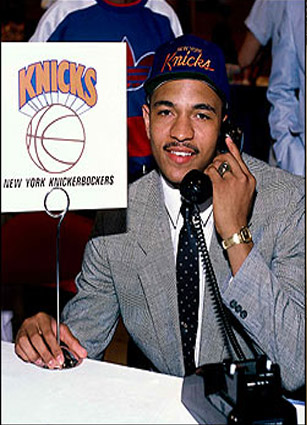 If you were watching the Warriors very carefully from your couch this season, you knew this might be coming.

In a mid-season game on ESPN, Jackson — who called several Warriors games this year — went out of his way to effusively praise both the team’s players and new owners, Joe Lacob and Peter Guber. To the press row, it seemed implausible the owners would replace Keith Smart with a completely unproven and untrained coach, but Jackson’s on-air message was clear. And off the air, there were rumors he was already cultivating a relationship with the organization.

His credibility as a former player and locker room leader is unassailable, but his post-career choices were more curious. Jackson thrived as a TV analyst

while simultaneously campaigning to move straight into a job as a head coach – without ever doing the drudge work of apprenticing as an assistant coach.

But even if Jackson lacks the determination as a coach that he had as a player, he still has greater chances of success than his predecessor, Keith Smart. Smart was promoted purely as an interim solution during an ownership transition, and was only provided budget for a relatively young and inexperienced group of assistants. When the new owners finally arrived, he was essentially told he’d have to take a team with middling talent (that was also scarred by the Don Nelson era) to the playoffs to keep his job.

With no time to build, Smart scuttled the offense he was trying to install, which was based on Jerry Sloan’s structured Utah system, and instead went back to Nelson’s familiar run-and-gun playbook. Making matters worse, several players privately admitted they knew Smart was a short-timer.

In the end, the Warriors were more focused and played harder for Smart than anyone expected, and the players would gladly have accepted him back. Off the record, Warriors front office staffers also expressed strong support for Smart prior to his firing. And GM Larry Riley, speaking on television just a few days ago, would only say of the coaching change that the new owners had a right to “paint their house” any way they like.

But Jackson will be an improvement over Smart regardless of anyone’s reservations. He will be granted time to implement his own system, and he will have the support of the veteran assistants the team is planning to hire around him. He’ll also benefit from a fully staffed front office, which now includes Jerry West, working to improve the roster. In all likelihood, Jackson will only need to be a serviceable head coach — and stay out of the way of the more experienced people around him — in order to enjoy some initial success. Anything more, at least at the beginning, will be a bonus.

No wonder he campaigned for the job.

Notes
—You don’t have to read deeply into West’s recent quotes to the Bay Area media to see he was teeing up a trade of the temperamental Monta Ellis.

—There have recently been a couple of instances of NBA players sending dirty photos over the Internet, which (like most NBA scandals), resulted in players in general being categorized as either dumb, uneducated jocks or as spoiled young kids who made too much money too soon, with a spoonful of racial stereotyping on the side. Which makes the travails of the New York Congressional delegation that much more ironic. Maybe Congress should appoint David Stern to issue fines. For what it’s worth, the average U.S. Congressperson is now statistically more likely to have an Internet and/or sex scandal than the average NBA player.