Adam Morrison is hot as a pistol 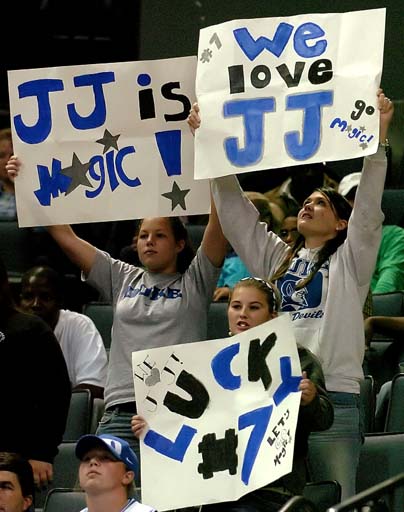 The best debut for any NBA rookie last night was by none other than the man with the grimy stache and moppy hair. Adam Morrison, 19 points on 7 of 14 shooting. Sure, these games don’t count, and it is of course, only one game. But a good night is a good night, and Adam is going to score alot of points this season. Raymond Felton said after the game that Adam is a shooter so he’ll be looking for him. The Bobcats have a nice young team, and one of the things they need most, other than Okafor to stay healthy for their rebounding and some shotblocking, is a bonafide scorer. Again, it’s only one game, but it looks like Adam can be just that. The NBA game is not too fast for him. So what if Keith Bogans went back and scored 14 on him. He’ll get better defensively, and if not… well, he’ll just have to score more or Gerald Wallace will have to give them some more of those crazy blocks off of the backboard coming from the weakside. But Adam looks like he belongs, and the Cats have their go-to guy. No more of those expansion team excuses. You’re in the NBA now Charlotte.

And as for Adam’s Halo buddy… Well, he didn’t play last night. But the fans in Orlando let their feelings be known. Call this photo exhibit A.

When it comes to the best two players from the NCAA tourney up to the night of a thousand tears, Adam’s career is off to a better start after night 1.