Al Harrington is smarter than us 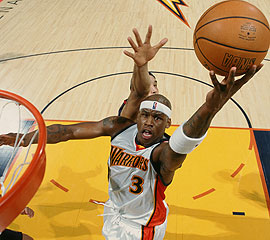 Al Harrington is in a Metroplex restaurant waiting for an 11 p.m. dinner the night before one of the biggest games of his life and he says something that comes off as shockingly, fork-droppingly unprepared.

“I’ll try to negate some of it with quickness, but you look at Dallas and they don’t look to get their center involved too much,” he says. “I heard we’ll see a lot more Devin Harris.”

And I laughed. Over the phone. Not in this series, buddy. They’re not going to try to outrun you. You have better guards. That would be inane; you’d run them into the ground. I know more than you, Al Harrington. Everybody knows more than you.

He’s smarter than this, he must have listened to Nellie in the video room. This was obviously not an answer sufficient to this man’s intellectual capabilities. Al is well-spoken, so I gave him a second chance. How are you going to defend Erick Dampier because you inevitably will, thank you very much.

So, politely, he answered – he’ll “try not to post bigger guys and give up the size, but if I get past them, there’s nothing they can do” – and I walked away happy for when the Dallas Mavericks strutted out Erick Dampier as their starting center in Sunday night’s Game 1 against Golden State Warriors, when the bigger team would slow down and pound away a smaller Warriors team that had no way to matchup.

Golden State had better guards. It was inane. The Warriors ran the Mavericks into the ground.

Al Harrington is smarter than me.

Because Harrington and the Warriors know something we don’t know: this style of play, most of the time, wins championships. The Warriors are playing that style better than anyone else right now, and dragging people into their trap in the process.

“If you can’t find a true center, this is the best way to go,” says Harrington, the team’s makeshift big man. “A lot more championships are won that way, spreading the defense and rebounds around. And it’s more exciting basketball, too.”
So when Don Nelson told the 6’9” Harrington that he was going to play center, he didn’t think 67-year-old coach was fast approaching senility. He’d seen in it before, just never with this type of results.

“In Indy, most people don’t remember, but for 15 games of the season, I was the starting center. When he told me I was playing center, I was excited,” said Harrington. “And, when we tried it, I was like, ‘Wow.’ The way we spread the floor, got to the free throw line and got open threes, it was working.”

But there was something still hampering this Warrior team that they had to fix if they wanted this chance to bring the Warriors their first playoff series in 12 years and their first playoff win in 14. Even new school, run-and-gun teams need old school 4th quarter determination. And that steal of a midseason trade that brought Harrington and Jackson to Oakland for Troy Murphy and Mike Dunleavy only got the job three-quarters done.

“What happened was, we would play ‘em tough until the fourth quarter,” says Harrington. “We had this meeting after that Knicks game (a 106-97 loss) and we said we have one more push in us. We lost our next game to Washington – we felt we were cheated at the end there – but from that point on, we were dedicated. We needed to make the playoffs. That was the turning point.”

“I’m one of the leaders, yeah, but the biggest leaders are Baron and Jax (Stephen Jackson),” said Harrington. “The team has a big trust in them. I’m one of the guys that ‘s just gonna come in and works hard and have people follow.”

So Harrington will lead a Warriors team into Dallas tonight that is already rolling, already talented and already confident. Harrington thinks the floor on a team like this is 50-wins with a training camp’s with of continuity in them. And they’ll win all 50 with a smile on their faces.

“This is fun – that’s another thing I try to tell these guys about pressure: we have no pressure,” he almost yells it while he laughs. “With Dallas, everything but an NBA Championship is a pressure. We’re finished already. We’re the underdogs. We’ve just got to go out there and get it done. I like where we’re at.”

Now, the Avery Johnson has said that he will again go back to smallball, buckling to the Warriors trap. Both in terms of pressure and now style of play, it is the Warriors’ series to lose. And with homecourt advantage for a group of fans that have “just been incredible,” Harrington and the Warriors have a strong chance to bring a 2-0 lead home to Oracle Arena.

“I can’t wait to see how they react to us on Friday,” said Harrington.
Oh, and there was one other thing I laughed at, right before I hung up the phone.

“How many games can we win it in?” asked Harrington. “I’m gonna say four.”

After Sunday night, I’m not laughing at Al Harrington anymore.