Allow Me to Introduce Myself 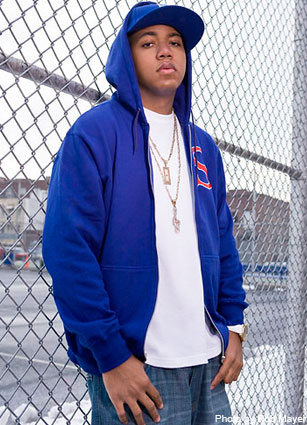 Wassup yall, this is Skyzoo. Brooklyn lyricist/Knicks fan/sneaker head. I recently linked up with Tzvi and Adam and the good folks here at SLAM to bring you “Chain Link Champions”—my personal blog on everything NBA related. Throughout the course of my career thus far, I’ve been known as a lyricist, a “rapper’s rapper”, etc. All are titles that I hold with pride and gratitude, and I don’t take any of them lightly. But aside from the music, I’ve always been a huge basketball fan. Growing up in NYC in the ’80s and ’90s, there’s no way you can “not” be a basketball fanatic. For me coming up, everything was rap and ball. The Lox and the Knicks. Purple tape and Penny Hardaway. I wrote rhymes and played point guard, modeling Nas and Penny as much as I could. To me, nothing meant more than the two.

As someone who yells at the TV when Paul Pierce gets his Broadway on when Melo boxes him out on Boston’s home court, or debates with Skip Bayless via DVR every time he calls LBJ “LeBrick” on ESPN First Take, or puts endless NBA references in their rhymes (the only one with more than me is Cormega. See “The Great Debater” on June 7th for proof), I felt it made perfect sense to start NBA blogging for the dopest basketball mag and site out. Tzvi and Adam agreed and pushed the button. And here we have “Chain Link Champions.” The breaking down of the pressures bestowed upon the kids who put their lives on the lines on the chain link courts of urban america, to become the DWades, Kobes, CP3s, Durants, Derrick Rose’s, and more, and all that comes with those becomings.

Every week throughout these 2011 Playoffs, I’ll be chiming in with my views, takes and insight on what occurs on the nightly. Strictly the League, nothing more, nothing less. Forewarning: I’m an avid Melo and New York Knick  fan, as well as a heavy LBJ supporter, so expect to see me riding with them in my rants, respectively, when they play, but know that if ever there’s a NYK vs MIA series, I’m NYK 100 percent, but non-biased when discussing the previous night’s matchups, be it NYK related or otherwise.

This year is easily the NBA’s biggest and best season, bar none. The intensity, the trades, the upsets, the expectations, its all at heights unseen in years prior to. Why not have it documented by someone from the same chain links as our new champions? So here’s to 2.5 months of NBA coverage from an emcee’s fan driven perspective. See yall next week.

PS: NYK all day (no biases though). Haha. Holla…