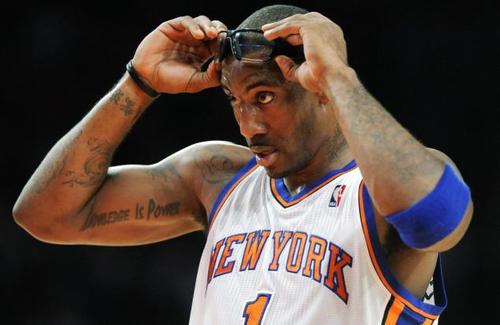 New York didn’t announce that their injury-plagued star had a third surgery in the last 12 months (which a source called a “clean up”) on one of his troubled knees:

However, the secrecy surrounding Stoudemire’s latest health issue could be an indication that the club is not optimistic that they can rely on the veteran power forward. Stoudemire appeared in just 29 games last season and had debridement surgeries on both of his knees, the right knee in October and the left in March. Stoudemire was on a strict minutes restriction last season and both head coach Mike Woodson and former general manager Glen Grunwald said last May that the plan going forward was to reduce the playing time of the fragile $100 million forward.

Stoudemire’s work ethic is second to none and in the past he has worked vigorously to get himself back on the court. However, the Knicks management is all but resigned to the fact that Stoudemire will never return to his All Star form on a consistent basis. Stoudemire is entering the fourth season of a five-year, $100 million contract. Because of his previous knee problems, Stoudemire’s contract is not insured. Stoudemire’s former team, the Phoenix Suns, were advised by their medical staff that Stoudemire would be physically limited in the third year of his contract.

Health will be the key to the Knicks’ season, with STAT’s status hanging ominously over everything.

Stoudemire hasn’t scrimmaged alongside his teammates at all in informal offseason workouts, and according to point guard Raymond Felton, Amar’e will be very limited during training camp.

The New York Knicks may not necessarily be better in 2013-’14 than they were last season (let alone pose a threat as title contenders), but as always, they will be fascinating.