An Invincible Dynasty Continues at MSG 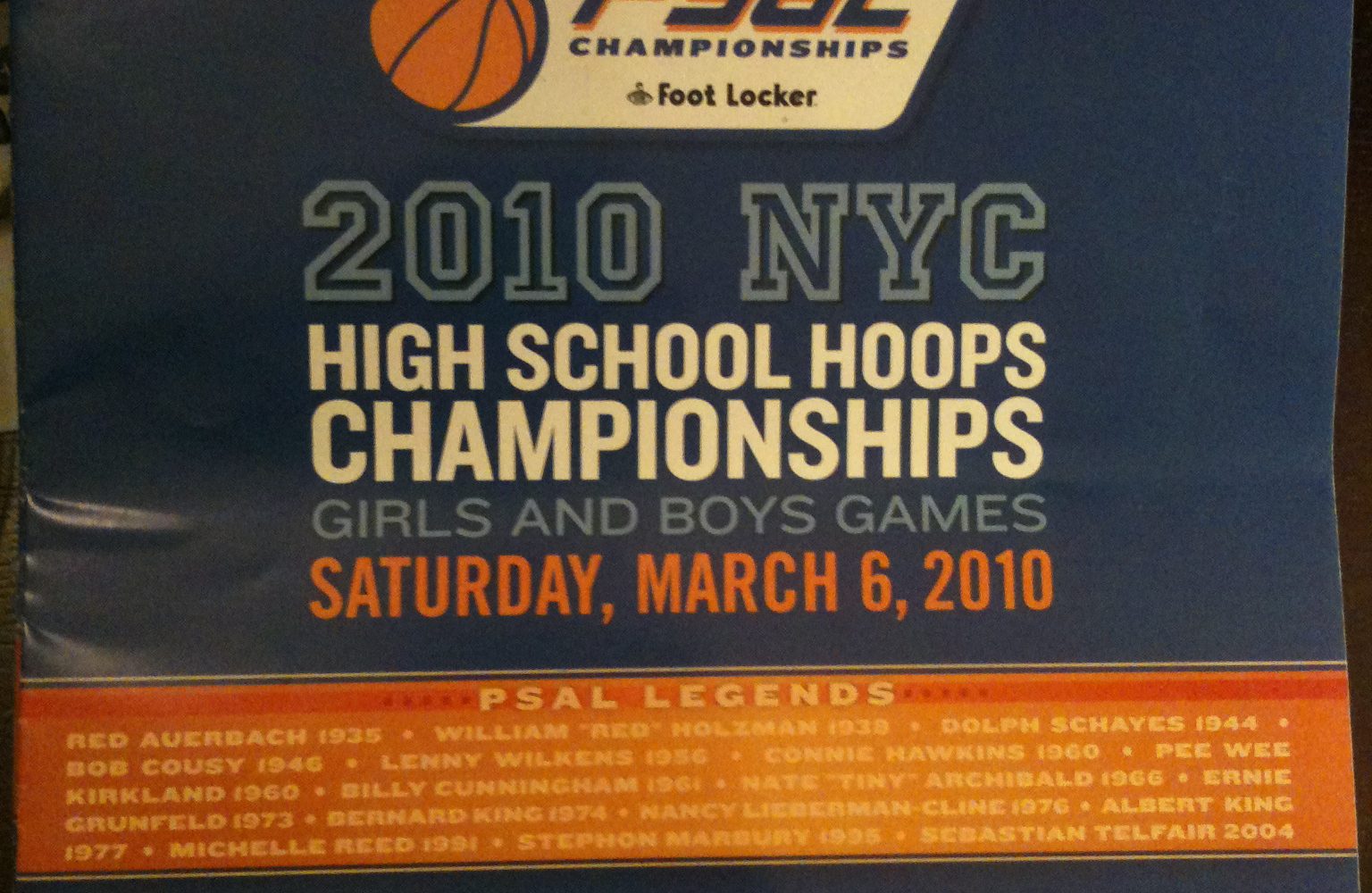 Admit it, you woke up this morning and went to slamonline expecting to see a Sam Rubenstein post about a high school girls’ championship basketball game. You always get what you want, don’t you?

Long time no Rubenstein, I know. When you last heard from me, I was at a Knicks-Nets game (ugh) with Tzvi and Russ, and my day job was that of a substitute teacher. A small amount of time has passed, which has felt like a thousand infinities, as I am now like a real NYC public high school teacher and stuff. I once wrote a column comparing teaching to coaching an NBA team, and felt that I was at the Rick Adelman level, where the players/students like me and things go well enough, then we have horrific flameouts where I stand there with my hands on my head and my mouth open looking like an 18 wheeler just ran over my cute little puppy.

I’m trying to reach that Phil Jackson level of speaking metaphysical nonsense, recommending randomly insane books or movies, riding on the coattails of a great player/student, and being able to point to my 10 rings and cool X hat.

Um… I’m not quite there yet.

Oh, and I teach at a school on the Kennedy campus (Bronx School of Law and Finance), and specifically there are two girls on the Kennedy team that are my students. Guard Candus Brown, and manager Collett Powell. So I might be a little biased here.

Candus is in my film study class, where I showed the students More Than a Game, the documentary about LeBron’s high school team and the circumstances around them. She followed up by asking me for recommendations on some good Michael Jordan movies, so I hit her with the 1-2 combo of Come Fly With Me and Jordan to the Max. Obviously I am the greatest teacher she will ever have.

Collett is in my filmmaking class, and she is a gifted singer. I accidentally got her in trouble the other day when she couldn’t leave my class to go to practice. But we were having major breakthroughs in our world of filmmaking! Mr. Rubenstein is the king of executive producers. More on that project when the time comes. From the nypost liveblog of the game: 10:55 a.m. — Sitting next to esteemed Kennedy manager Collett Powell, who should be singing the National Anthem in a few minutes, but will not be. Knights coach O’Neil Glenn told me she brought the house down when they went up to Amsterdam, N.Y., over the holidays.

Walking into the building yesterday, I did not know that my school was up against a national powerhouse, in the quintessential David vs. Goliath showdown. As it turns out, the Lady Blazers are like UCONN in the city. They were going for their 12th straight PSAL city title. My school was an underdog to put it extremely kindly.

Later on in the evening, the Nets would come here to play the Knicks. You could say I’m at the best basketball game of the day at MSG. Okay, that’s not fair to the H.S. Boys championship game that followed the girls. (And now that the Knicks game has ended, it’s not fair to the Nets either.)

Floor level seats, baseline. The game opens with a travel by Shaquaya Daniels of Kennedy. All she did was the Dwyane Wade dribble where you gain about 15 feet of floor space with each carry/palming. I guess they call that here.

The game has four 8-minute quarters, and after a sluggish start, Daniels gets to the rack, Deaisia Acklin hits an open baseline jumper and we are up 4-0.

Cori Coleman of Bergtram floats in a Tony Parker teardrop, and Kennedy responds with some inspired play on the big stage by Sarah Vann, a mohawked machine of a player, who cleans up a miss from #10, and backs it up by taking a charge on the other end.

Bergtram goes to their pick-n-pop game, and we’re tied at 6 with 3:17 to go in the first quarter. Janelle Linton goes to work, unstoppable at her height in the post, but not the most unstoppable player on her team. We’ll get to that.

Sarah Vann with a beautiful pump fake to get her girl off her feet, then drives for the lay-up. They don’t play music during the game, so you can hear the squeaks of the sneaks, the coaches yelling, the parents screaming at their daughters. Final score after 1, 13-10.

Honorable mention #23 Jack Shephard, last seen losing his mind and shattering mirrors at the lighthouse, starting to recognize his destiny is with Jacob.

Back to Doris Ortega: she gets the ball and goes into triple threat position, and it’s over. Heading into this game, Bergtraum’s record over her four years there is 99-2. My first introduction to Ortega was when she grabbed a rebound, turned the other way and nearly pulled off a Derrick Rose-esque body twisting layup in traffic. She doesn’t, so the next time down she just knocks down a jumper the easy way.

A woman behind me complains that the Kennedy Shaquaya Daniels is too busy showing off her handle, driving around all crazy, and not running the offense. I don’t feel bad about writing this down because she was screaming it at her right at her, and she seemed to be Shaquaya’s mom.

One of the most impressive Kennedy Lady Knights is Danissa Smith, playing with a leg brace on what I was told was an injured knee. She spots up for 3, and she’s a cold blooded sniper like me in Modern Warfare 2. After a Bergtraum miss, she puts up another one that rims out, and there was a traveling call somehow involved. If that thing went down, it would have been 23-22 Kennedy heading into halftime and all hell would have broken loose.

The first half ends with a mini war under the boards, which Kennedy survives, and are down 22-20 heading into halftime. Do we have a live dog?

They believe! This is just like the USA hockey team after the Zack Parise miracle on ice!

And that was as good as it got.

Daniels over-dribbles, loses it inside, but Danissa Smith digs it out, dribbles back to the line and sticks a deep two. Heart!

HOWEVA… Shukurah Washington on Bergtraum. If you can call a young lady a beast in a complimentary way, I am doing it. Nine boards in the first half, now dominating the glass by herself, getting easy put-backs. She would finish with 10 and 19. BEAST! Someone near me makes the Moses Malone comparison.

A Kennedy highlight comes when Chelsea Custodio does the layup on one end, take a charge on the other thing. Love it!

But much like a supermarket that doesn’t sell Tostito’s or Paul Newman brand salsa, it’s too much Ortega.

(Yes I know, that was horrible. They have real salsa availability issues in my neighborhood. What’s the deal with those weird desert pepper salsas? Why is Amy’s so expensive? Who is Glen Muir?)

Ortega inside, Ortega outside, it’s 44-27. The last championship game I went to was Celtics-Lakers, and that game was a victory lap coronation. So is this.

The fourth quarter is a formality, and if they were NBA professionals I would call it garbage time, but none of these young ladies are garbage. My student Candus Brown gets a few minutes, I go down to talk to Collett, but she doesn’t hear my desperate screams, just like in class!).

Ortega scores 19 as she takes home MVP honors, and Washington has 10 and 19. Dynasty! Both are seniors and go out on top as they should.