An Open Letter to Andrew Bogut 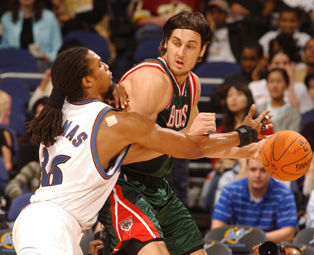 When I first read your comments to the Sydney Morning Herald, I didn’t quite know how to react. I wanted to wait and see if anyone else was going to object or have a discussion about your remarks. I was surprised not to see this issue as one of the main topics on ESPN — I guess they would rather talk about other items that are more pressing. I have to say that there are aspects that I agree with and aspects that I take not only offense to, but that are just plain incorrect. You applied sweeping generalizations in your attempts to demonize an entire group of people — or the “80%” you are referencing in your article — into one big negative mass you simply refer to as “American Culture.”

An interesting aspect of the discussion, which was discussed on The Starting Five blog, was that many people began attacking you personally. People began expounding on areas that were otherwise unrelated and impertinent to any of your comments. They began criticizing your game, the fact that you haven’t made the playoffs, your team’s record — all of these irrelevant arguments that had absolutely nothing to do with your point. In addition, people began writing articles saying that you had no right to say what you said, which I also disagree with. You have the freedom to voice your opinion, view, feeling or belief. That’s the whole free speech thing that is enjoyed in this country. And at the same time, I have the right to object.

One part of your comments that I found fascinating was when you said, “The American attitude is ‘We’re the best.'”

Now, when I read that, I thought maybe you were alluding to the audacity of a country to wrongfully and unjustly invade another country. The utter nerve of a country to start a war that has not only failed to bring peace, but has had an overall aftermath that has proven to be more detrimental, disadvantageous and overall unfavorable. I thought about the impudence of a country to feel that their way of democracy is the best and only way a country should be governed, and therefore decided to force their belief system on an entire nation at the hand of a gun. But, I don’t think that’s where you were going.

“The public’s image of NBA players is true; a lot of them get caught up in the hype and do video clips with rappers and all that crap. They want bling bling all over themselves and drive fast cars. But that’s just the way the culture is in America — if you’ve got it flaunt it and if you don’t, you can’t.”

“I’m not into jewellery. I’ve got some earrings but they’re not too expensive. There are guys who drop a hundred grand for a chain. The public’s got it right — a lot of NBA stars are arrogant and like to spend lots of money and have lots of girlfriends and all that.

“The smarter guys don’t do that. They like to live a regular life and want to retire and be set up. About 80 per cent of them go broke by the time they retire or come close to it.

I found it interesting that you said you were not perfect, and that you have admittedly bought yourself a nice car, some jewelry of your own, and that you didn’t want to come across as arrogant, but that you also wanted to separate yourself from the image of most players. But, that’s exactly how you came across: You exuded an overall elitist attitude. Your words showed that despite your desire in buying a nice car or jewelry, you viewed yourself as somewhat better than everyone else who does the exact same thing. Buying jewelry — and this is coming from someone who doesn’t even believe in diamonds — doesn’t automatically put you in a category of someone who has gotten “caught in the hype.” In your words, “they want bling all over themselves and drive fast cars,” but you are doing the exact same thing. If I were to look at you with your earrings and your expensive car, would I be right to throw you into the same category as the rest of the “80%” of the league that you were referring to. Or, do you believe you possess a certain quality that makes you different, that sets you apart, even if it appears as though you are involved in the same activity?

The fact of the matter is, nothing is wrong with a player liking jewelry or cars, if that’s what’s you are into. Of course there’s a problem if you do it in excess and don’t save your money or prepare for the future, which is simply not an intelligent method of conducting the business entity of your own corporation. But to say “80% of the them…” — it’s very interesting how you consistently excluded yourself, as if you weren’t part of the league — “…go broke by the time they retire,” is quite an exaggeration.

I don’t know where you are getting your figures from, but you have no idea what investments guys make. You have no idea what way guys are conducting their business. You assume that because you see an excess of “bling,” and I do agree that there is a definite excess, that it somehow translates to us going broke, that simply isn’t true.

Your statement that, “If you want to keep living that lifestyle when you’re 40, but the millions have stopped coming in, you suddenly find your friends are gone and you’ve got nothing” is absolutely true, but, you don’t stop there. You continue to say, “It’s a tough situation for some of those guys, especially the ones who come from the ghettos or tough upbringings.” Again making generalizations and setting yourself apart. You’re equating bad decisions with a “ghetto upbringing,” leading me to believe that you are referring to an exclusive group of players. Interesting.

Then you go on to say, “The smarter guys don’t do that. They like to live a regular life and want to retire and be set up… The American attitude is that we’re the best. That’s why the NBA guys who come from other countries, the Europeans, all sort of stick together away from the game.”

So now you’ve completely drawn the line in the sand. You didn’t say “international players,” you said specifically “European” players. I read that you moved to Croatia when you were 14, so I guess that’s why you are including yourself with the other European players. You didn’t say International players, I guess because that would have included Dikembe Mutumbo, Eduardo Najera, Adonal Foyle, Jamaal Magloire, Desagana Diop, Michael Olowokandi, Luol Deng, etc., and I guess they are not included in your highly exclusive circle of European players you feel more comfortable around.

In your words, “It’s just the culture over there…I would never want my child to grow up in an environment like that.”

Andrew, Andrew, Andrew. The entire country of America is not all the same. Maybe you haven’t been here long enough, but you don’t understand that the world we live in as professional athletes is in no way a representation of the way the majority of the country lives. You keep making sweeping generalizations. What if I were to say that 80% of Australians all share in the racist, hateful, evil treatment of the Aboriginal people of the land? That would be an inaccurate characterization and sweeping generalization, wouldn’t it? I know when I pick up history books, that’s what I see. Current events of the treatment and struggles today of the Aborigines seem to mirror an overwhelmingly consistent evil attitude of the past, but how could I equate a percentage to the entire continent? That just wouldn’t be intelligent or possible.

You’ve been in this country for what, six years now? I am sure that it is easy to jump to conclusions, and I have been told that the actions of the few outweigh the many, but be careful. While I would definitely say that this country is far from perfect, and while it is a fact that this country is hated around the world primarily for the actions, choices and decisions of our leaders, to say that you “would never want your child to grow up in an environment like that” is a bit much.

Over-generalizations are reckless and irresponsible to make.

Something to think about before putting us all in one box.