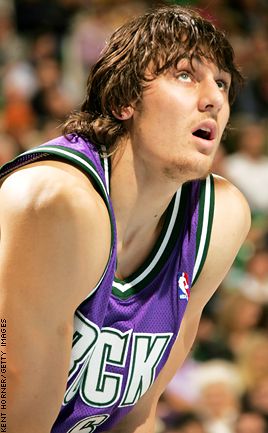 Without really wanting to, I would assume, Andrew Bogut had himself one hell of a summer: He not only unveiled the most hideous hairstyle in NBA history (the nasty rat tail, sadly, has been shelved), but the big Aussie planted his foot in his mouth by denouncing the NBA’s “bling-bling culture” in an interview with the Sydney Morning Herald. The response, predictably, was not kind to Bogut.

“It was just my opinion,” Bogut said.

“It’s something I have to take on the chin. The point I was trying to make was that the culture was completely different for me coming from another country. I didn’t put it across the way I liked to. Looking back on it now, it was a mistake the way I brought my point across. The point I was trying to get across was coming from Australia where we have 18 million people, a very laid back country, to America . . . all that bling bling – all that stuff – it’s something I did not grow up with. It definitely was a shock to me (at first) but being around it for three years, it’s fine to me now.”

It’s fine to you now, but it wasn’t five months ago when you sat down for the controversial interview? Riiiiight. Methinks somebody wasn’t paying attention during his briefing with the Bucks PR staff.

(By the way, JS Online, would it kill you to link to Etan Thomas’s response to Bogut’s idiot comments on SLAM Online, instead of saying he wrote a letter on a “web site”?)